The Young and the Restless Spoilers: Week of June 5 – Huge Twists, Growing Bonds and Sudden Setbacks 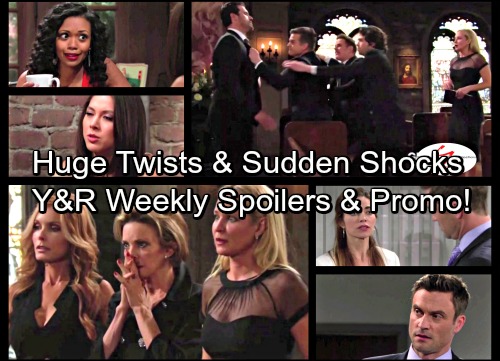 The Young and the Restless (Y&R) spoilers for the week of June 5 through June 9 tease that the heartbreak will continue for several Genoa City residents. Chloe’s (Elizabeth Hendrickson) memorial service will soon get underway, but a couple of funeral crashers won’t be welcome. When Kevin (Greg Rikaart) spots Chelsea (Melissa Claire Egan) in the crowd, he’ll immediately chew her out.

Chelsea will explain that her relationship with Chloe was complicated in the end, but she truly loved her. They were best friends before all the Adam (Justin Hartley) drama blew up. Kevin will try to see the situation from Chelsea’s perspective. He’ll calm down slightly, but Nick’s (Joshua Morrow) arrival will stir up even stronger emotions.

The Young and the Restless spoilers state that Kevin will go ballistic. He’ll lash out as he copes with his rage and grief. After the confrontation, a huge twist will catch everyone off guard. Y&R fans won’t want to miss this epic shocker!

Meanwhile, Juliet (Laur Allen) will move forward with her latest plan. Hilary (Mishael Morgan) advised Juliet to sue for sexual harassment and she’ll decide she might as well go for it. Now that Juliet is out of a job, she believes she deserves some payback. 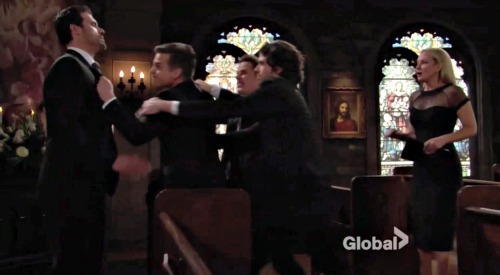 The Young and the Restless spoilers say Victoria (Amelia Heinle) will be stunned when Brash and Sassy is served with legal papers. She won’t know how to handle all of this. Victoria’s company is already on the hot seat thanks to the betting debacle in Hollywood. They really can’t afford another scandal right now.

Of course, Cane (Daniel Goddard) is going to be under fire in more ways than one. Major consequences are coming for him. Elsewhere, Abby (Melissa Ordway) will have Zack (Ryan Ashton) on her mind. She’s teaming up with this young entrepreneur on a business project, but she’s definitely attracted to him.

When Dina (Marla Adams) notices their chemistry, she’ll nudge Abby to make a move. The Young and the Restless spoilers hint that Abby won’t be sure it’s a good idea at first, but Dina will win her over. Dina and Abby will share some nice moments as they establish a real bond.

However, big trouble could be brewing. Zack may have some buried secrets that Abby won’t appreciate. Tessa (Cait Fairbanks) might be able to fill Abby in on those eventually. We’ll give you updates as other news comes in. Stay tuned to Y&R and don’t forget to check CDL often for the latest Young and the Restless spoilers, updates and news.