The Young and the Restless Spoilers: Week of September 18 – Sneaky Moves, Shocking Discoveries and Dangerous Connections 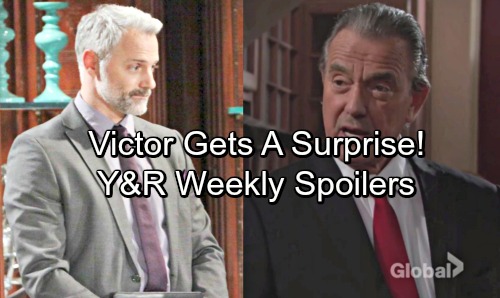 The Young and the Restless (Y&R) spoilers for the week of September 18-22 tease that several Genoa City residents are headed for trouble. For starters, Nick (Joshua Morrow) will face some challenges thanks to Victor (Eric Braeden). Chelsea (Melissa Claire Egan) will get caught in the crossfire as Victor takes a stand. He’ll make his position crystal clear and “Chick” will just have to deal with it.

Once Victor lays down the law, he’ll turn his attention to Nikki (Melody Thomas Scott). He’ll feel like she needs to butt out of his business. Victor wants to do things his way, but Nikki hates watching the Newman family fall apart. She’ll do her best to it keep it together, but Victor will make that increasingly difficult.

Across town, Scott (Daniel Hall) will make a surprising discovery. It appears he’ll get a big break in the sex ring case. Whatever Scott learns could help him locate Crystal (Morgan Obenreder), but there’ll certainly be some risks involved.

Speaking of risks, Juliet (Laur Allen) will take a huge one in the week ahead. The Young and the Restless spoilers say Cane (Daniel Goddard) and Lily’s (Christel Khalil) marriage destruction will continue. When Lily bails on a therapy session, Juliet will sense that she has a window of opportunity.

Cane will ask Juliet to have dinner with him at the Chancellor mansion, which sounds like a recipe for disaster. If Cane truly wants to win Lily back, bonding with his “baby mama” isn’t the greatest idea. Nevertheless, Juliet and Cane will share some warm moments. This evening could easily take a shocking turn.

Other Y&R spoilers say Billy (Jason Thompson) and Victoria (Amelia Heinle) will take their relationship to the edge. They’ll flirt with a dangerous line, but will they actually cross it? Billy is trying to fight their connection, but he may not be able to hold out much longer.

At least Billy will make time for Phyllis (Gina Tognoni) soon. They’ll enjoy some sex sessions, but will Victoria be the woman in Billy’s thoughts? Elsewhere, Graham (Max Shippee) will send hard evidence to Victor. The Young and the Restless fans will recall that some pictures were taken of Jack (Peter Bergman) and Nikki at the cabin. Graham orchestrated this photography trap with a goal in mind.

Graham will make sure Victor gets the pics, but he’ll let him believe they can from Dina (Marla Adams). Meanwhile, Ashley (Eileen Davidson) will feel like she has nowhere to turn. As she’s backed into a corner, her long-held paternity secret could be on the line.

It looks like the action is heating up on the CBS soap. We’ll give you updates as other news comes in. Stay tuned to Y&R and don’t forget to check CDL often for the latest Young and the Restless spoilers, updates and news.