The Young and the Restless Spoilers: Who is Worse – The Abbott Family or Graham?

BY Sean O'Brien on October 16, 2017 | Comments: one comment
Related : Soap Opera, Spoiler, Television, The Young and the Restless 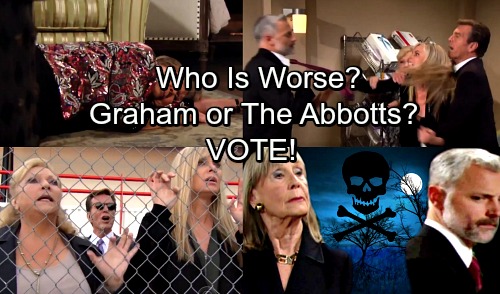 The Young and the Restless spoilers tease that Graham’s (Max Shippee) plan to leave Dina for dead won’t work, but he’ll attempt to whisk her away on a plane in an attempt to retain control and gain her money. But instead of solely painting Graham as the bad guy in this arc, should the Abbott family’s cold and hypocritical behavior be called out as well? In particular, the spotlight should be shined on Ashley (Eileen Davidson) and Jack (Peter Bergman).

No rational person can side with Graham Bloodworth, Graham Davis, Graham Cracker or whatever his real name is. He lied to Dina (Marla Adams) to gain her trust when he first got to know her in France. Then, he ingratiated himself into her personal life. Eventually he became Dina’s right-hand man and the person who stands to gain the bulk of her estate.

As Y&R viewers have learned, Graham targeted Dina based upon his mother Myrna’s (Marcia Rodd) insistence. This woman, who Graham initially claimed to be his aunt in order to keep his true identity concealed, blamed John Abbott’s (Jerry Douglas) one-time wife for destroying her family, which once included Brent Davis (Bert Kramer). Davis, as only longtime fans recalled, was revealed to be Ashley’s biological father in the mid-1980’s. Ah, soap. 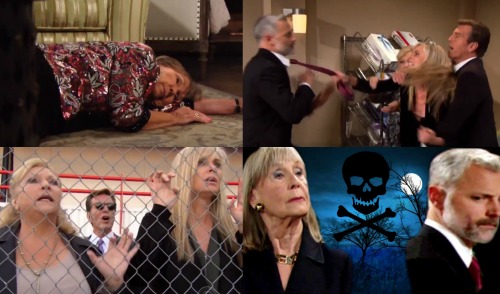 The Abbott children weren’t thrilled that Dina brought Graham with her when she came back to Genoa City earlier this year. However, she opted to stay in town after completing the sale of Mergeron to the Hamilton-Winters Group. Dina’s goal was reconciliation with her family. She admitted past wrong-doing and humbled herself in ongoing attempts to regain her children’s trust and love.

As time went by, Dina decided to change her will. She left the bulk of her estate to Graham, which made Ashley and Jack furious. Traci (Beth Maitland), not really. She inherited John’s pleasant disposition.

Ashley didn’t want Dina back in town, as her presence revived memories that she wasn’t John’s daughter. Jack was less resistant because he had fonder memories of Dina, but has lambasted her on countless occasions since she’s returned. Traci’s been mostly out of town, which left Abby (Melissa Ordway) as the only member of the family to show Dina consistent kindness.

No wonder Dina remained committed to Graham for so long. Ashley and Jack forced Dina to offer him the benefit of the doubt. But would those two middle-aged children, who often act like brats, have the guts to admit that’s so?

Graham is surely no angel. But Ashley and Jack also aren’t blameless for the trouble that Dina has experienced since she was rewritten into Y&R.