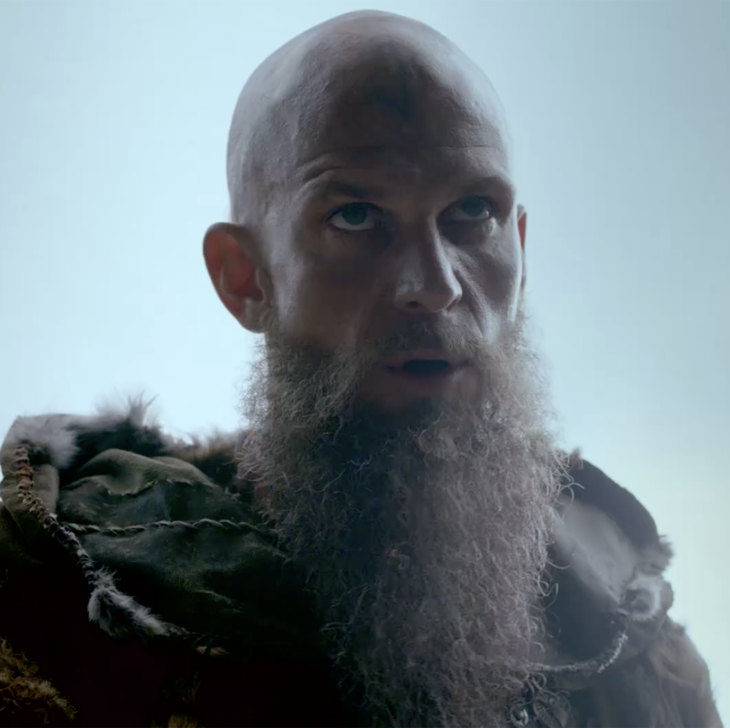 Tonight on the History Channel Vikings returns with an all-new Wednesday, December 27 season 5 episode 6 called “The Message” and we have your weekly Viking recap below. On tonight’s Viking season 5 episode 6 episode as per the History synopsis, “Lagertha is betrayed, and Bjorn must find a way to support the distraught queen. Meanwhile, Floki and his settlers arrive in a new land, but it is far from what they expected.”

Vikings begin tonight with Kassia (Karima McAdams) ordering the men to behead Bjorn Ironside (Alexander Ludwig) Halfdan the black (Jasper Paakkonen) and Sinric (Frankie McCafferty); but as a sandstorm approaches, Kassia seeks shelter with Ziyadat-Allah (Khaled Abol Naga) inside the tents as the Vikings are surrounded. When the sand takes over, the rush to the camels and escape.

King Harald Finehair (Peter Franzen) and Astrid (Josefin Asplund) are enjoying each other’s company when the horns sound announcing the arrival of Ivar (Alex Hogh Andersen) and his fleet of ships. Ivar reveals that he and Ubbe (Jordan Patrick Smith) had a falling out and he returned to Kattegat, but Hvitserk (Marco Ilso) sided with him. King Harald informs them that Astrid is his Queen now. Ivar says they are there to support him to take over Kattegat, but wants him to allow Ivar to remain king of Kattegat until he dies, as it only matters that he gains the kingdom back from the murderous bitch Lagertha (Katheryn Winnick).

Harald wants to meet Bishop Heahmund (Jonathan Rhys Meyers) and he is brought in on his knees; Ivar says he is a great warrior and he will not kill him as he admires him, hoping he will fight for them rather than be crucified. Heahmund says he will do nothing, and begins to preach God’s word to Harald and Astrid. Harald doesn’t understand him, saying praying to his God won’t do him any good.

King Aethelwulf (Moe Dunford) doesn’t want to run and hide anymore, his wife, Judith (Jennie Jacques) agrees with him. Alfred the Great (Fredia Walsh-Peelo) goes into the chapel and prays, talking to his grandfather, King Ecbert’s (Linus Roache) grave. He promises that he will fight and restore the kingdom to its former glory, to realize his dream of becoming king of all of England or perish trying.

King Harald watches as Ivar slices a fish in half, saying it is the Bishop’s sword, feeling it is a magical sword, the metal is stronger than theirs, killing many men with it and never bending it. King Harald says the sword gives him a great advantage, like Odin’s spear. Ivar says all he wants is revenge. He wants revenge for her killing his beautiful mother. Ivar asks him what it’s like being married to Lagertha’s lover, and hopes it is worth it.

Lagertha arrives, and discovers Floki’s (Gustaf Skarsgard) betrayal, as some of the villagers are loading boats preparing to go to the land he has told them about; the land of the gods. Lagertha says he deserves to be punished as she has done nothing to deserve this betrayal. She confronts Kjetill (Adam Copeland) and Aud the Deep-Minded (Leah McNamara) who says she has to accept her fate that it wasn’t Floki calling her, but the gods and she will accept whatever is coming.

Lagertha says she will allow them to go and hopes that Floki has found what he has found because not only is he the boat builder but also the trickster! Floki touches her face and bids her farewell, as she rides off with Torvi (Georgia Hirst). Margarethe (Ida Nielsen) tells Ubbe that this proves that Lagertha is losing power or she would have never let them go.

Ivar talks to the Bishop, offering his a choice of either fighting alongside him, or he will kill him. Heahmund says he is not afraid to die for his faith but Ivar reminds him he is simply asking him to kill more of those he calls heathens, admitting he is jealous of him and his strength. He wants to be a great warrior and wants Heahmund to fight alongside him because he is a great warrior.

Floki laughs as they approach the land; the others look at each other, saying not to worry as it can’t be as bad as it looks.

Hvitserk talks to Ivar who has no idea if the Bishop will fight with them. Ivar admits that he really didn’t make any arrangements with King Harald which makes Hvitserk wonder what Ivar has planned for him. Ivar says it is best for them to pretend there is a plan because it suits everyone for the moment. Hvitserk is growing weary of Ivar, as he says he wants to be the greatest man who ever lived; much greater than their father, Ragnar (Travis Fimmel). He wants it to be that no one will forget Ivar the Boneless! The Bishop prays on his knees while he is chained in the dark room.

Hvitserk and Ivar celebrate as they talk to King Harald who says they are finishing the repairs of the ships and then they will take over Kattegat. It is a full moon that night, Ivar suggests they attack within two full moons time. Harald questions Astrid about attacking Kattegat as a Queen now and he stands and says if anyone breaks their agreement, they will deserve to die!

Judith finds Alfred packing, he has decided to go on a pilgrimage. He wants to go to help him understand things. He says he needs to follow in his father’s footsteps and find out who he really was, and where he came from. Judith will not deny him the journey. Outside, King Aethelwulf watches as Prince Aethelred (Darren Cahill) is sparring, he says he has the makings of a great warrior and a great king.

Astrid talks to Hakon (Laurence O’Fuarain), the captain of a fishing crew. She talks to him about fishing close to Kattegat, then takes him to a hut where she asks him to deliver a message to someone in Kattegat. He understands that it is dangerous and she agrees to make it worth his while, with enough jewels for him and his crew to never go whaling again. He promises to not betray her, but on top of the jewels, he wants to have sex with her because she is the Queen.

Floki brings the Vikings with him, who are getting angry with him, saying this is barren; but Floki tells them they need to walk for a few more days. Kjetil wants to know why they didn’t settle on the coast. Floki tells them they will have to work so hard and will curse the land and the man who brought them there but in the end, they will thank him for bringing them to the land of the gods.

Astrid is sharpening her knife when Harald puts his hand around her neck as he walks past. She remembers Lagertha is in bed. She returns to the docks as a young boy watches her go into a hut, she gives Hakon the treasure. She tells him to tell Lagertha that the attack will come in two moons time, he swears on the gods to deliver the message. As she tries to leave he pulls her back in saying the sex is part of their agreement but she shows no interest in it. The boy is watching and Astrid sees him, when Hakon is finishing, his crew comes in and all want to have sex with her. She refuses and one by one they attack her, when she fights back Hakon orders her to stop or he will tell King Harald how she is betraying him.

Lagertha receives the message that Astrid sent to her; Ubbe and her learn that Ivar has joined forces with King Harald. When Hakon is escorted out, Lagertha says they need to decide whether to wait there for attack or choose another place to do battle. She tells Ubbe that he will lead their army; he is upset that this will rip their father’s legacy apart but Lagertha reminds him the Seer told them it will tear their world apart. Torvi says they must all prepare for it, as everyone leaves Lagertha orders Margrethe to stay back. She tells her if she continues to give counsel against her, to question her judgment, authority and competence; she needs to cease to do it as the stakes are too high and if she hears it one more time, she will cut out her tongue and enslave her once more. Margrethe says Ubbe might have something to say about that and Lagertha reminds her that Ubbe doesn’t rule Kattegat and as long as she rules there, she will do as she says!

Bjorn and Halfdan race towards the open seas. Meanwhile, Bishop Heahmund is pushed and taunted by the Vikings. Ivar orders them to be quiet, telling him to decide whether he will fight with them or he kills him. Heahmund, all beaten and bruised asks Ivar for the knife, and Ivar gives it to him. The Bishop turns towards the crowd who shout for him to die; he stabs one of the men through the throat instead as Ivar laughs and claps, saying he will fight with us!