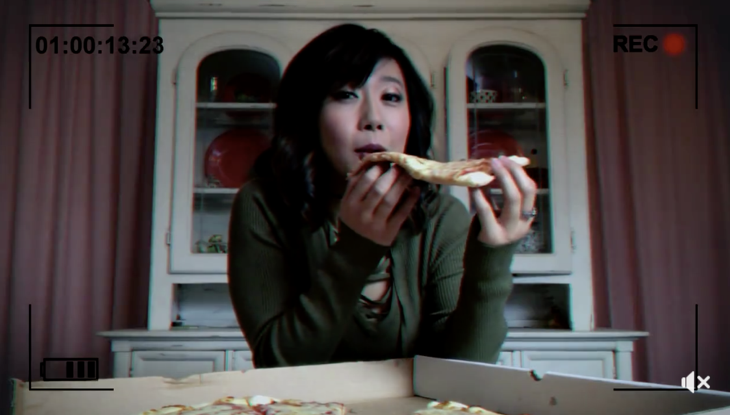 Tonight on CBS their new crime drama Wisdom of the Crowd  airs with an all-new Sunday, December 170, 2017, episode and we have your Wisdom of the Crowd recap below.  On tonight’s Wisdom of the Crowd season 1 episode 11 “Alpha Test,” as per the CBS synopsis, “Tariq has a personal case for Sophe after his childhood friend is the target of a violent stalker. Also, Tanner desperately tries to locate a recently deported individual that a Sophe user identified as a key witness in Mia’s murder case.”

Admin comes in the tell Jeff that they have a user that wants to share information they have on the man in the video Jeff has been trying to ID. Jeff takes the call. It is a man who works for ICE. He opened his work file this morning and came face to face with the man in the video. The guy has been busted for cocaine and was deported since spending time in jail. Jeff thanks him and takes off, leaving the office.

Tariq is hanging out with his friend, a blogger who runs a dating site. They head to her apartment. She opens the door and sees it has been vandalized with derogatory insults towards her. They head to see Sara. She calls Tommy. The blogger has been receiving threats from her blog posts. Sara tells her to stay somewhere safe tonight and they will start looking around.

Jeff heads into a bar where he knows the man in the video used to hang out. He asks a few people in the packed bar. One man tells him to come outside he can offer him some information. Outside, the man punched Jeff in the face and tells him never to come back.

Tariq brings his blogger friend home to where he lives with his parents. They pull him aside and tell him he needs to sleep on the couch. He tells them she isn’t his girlfriend, but they don’t believe him. In the living room, they are all talking. Tariq hears a sound. The SWAT team busts down the doors and comes in with guns raised, demanding they all get down.

Tommy comes in. The whole thing was a misunderstanding. They received a call that there was a man who had a bomb strapped to him. He allegedly forced a woman into a house. The blogger apologizes to Tariq’s parents. This is all her fault. She is being stalked and it appears the person called in a fake SWAT call.

Jeff goes back to the bar in the light of day. The bartender tells him he must have a death wish. He tells her he isn’t going anywhere. She tells him she knows the guy was living with his cousin at one point. If he leaves his number she’ll see what she can do.

Jeff gets a text that the guy is in the hospital and he is about to go into surgery.

Back at the office, Sara, Tariq, and the others start to compile leads on the blogger Lizzy’s case. Lizzy wants to go back to her apartment to get some things. Tommy and Tariq go with her. She is in her room packing when she hears a noise. She heads to the front door and screams. Tommy and Tariq come running. It is Lizzy’s ex-boyfriend. Tommy sits him down for questioning. He swears he just showed up to check on her.

Jeff gets a text while he is at the hospital. He meets with the man’s cousin who has a video of a guy dropping off $3k on his cousin’s doorstep. He wants Jeff’s car for the video. It’s a loaner, Jeff tells him. He doesn’t care. They make the exchange.

Lizzy sits with the team and sifts through the users and evidence. They track down a user that has left comments on her website. She realizes it is her ex-boyfriend. Tommy and the cops head to his house. They bust in. He is dead on the floor.

Back at SOPHE, the team learns that Lizzy’s ex-was working with the user who was stalking her. When he didn’t want to do it anymore he wound up dead.

Jeff shows up. He tells them to add the money drop video, ignoring Tariq’s case. Sara heads into his office and lectures him on disappearing, his black eye and not helping with Tariq’s friend who is in real danger. He agrees. He has been selfish.

Lizzy tells Tariq she is going to leave to go see her sister. He talks her out of it. She needs to stay safe with him. She needs to go.

Alex is still at the hospital. She sees the man’s mother. She is upset, hoping her son pulls through surgery. Alex offers her a coffee and an apology. She thought the man was the one behind her daughter’s murder and now she doesn’t know. She cries. The woman says nothing. They sit in silence.

Lizzy is on the phone with Tariq. She just arrived at her house to get her things to leave to her sister’s. She assures him she is okay. She hangs up and unlocks the door. Someone grabs her from behind. He pushes her into the house, telling her she is a bitch. Tommy comes from behind with a gun. They get the guy. Jeff shows up and tells Tariq he is sorry he wasn’t there from the beginning.

Jeff catches a ride and asks the driver to take him to Oakland. At a stop sign, a man in a suit gets in. jeff asks what is going on. The man tells him he works for someone with deep pockets. He was the one who hired the man in the hospital and the person who did the money drop. Every time Jeff shows their faces online he has to make them disappear. He is a father himself, telling Jeff he needs to look for the person who killed his daughter from the top down. He stops the car and tells Jeff to get out.