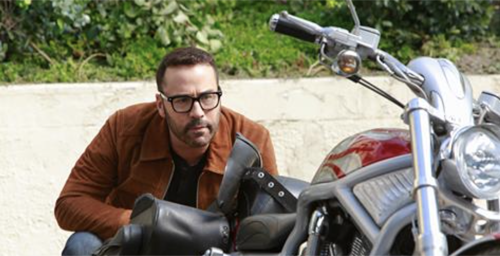 Tonight on CBS their new crime drama Wisdom of the Crowd  airs with an all-new Sunday, November 26, 2017, episode and we have your Wisdom of the Crowd recap below.  On tonight’s Wisdom of the Crowd season 1 episode 9 “Proof of Concept,” as per the CBS synopsis, “Tanner is offered new evidence in Mia’s case if Sophe can prove someone is innocent of murder. Also, Tanner and Sara begin depositions with AllSourcer for the rights to Sara’s work and Sophe’s code.”

Tanner arrives for his deposition with AllSourcer so that he and Sara can get the rights to her work and Sophe’s code. He recalls the day he met Sara and his job offer to her. He was impressed by her and her research. His phone rings. He steps out to take a call. It is the local prison. He accepts the charges. The unknown male voice tells him that he knows he killed Mia’s supposed killer in prison. Tanner leaves the deposition quickly without telling anyone and heads to the prison to meet the man.

He comes face to face with a bald-headed man. He can give Tanner the information he is looking for as long as Tanner helps him get his niece Julia off. Tanner heads back to Sophe. Tommy is coming in to inform him about Julia’s case.

Tommy arrives and explains to Tanner that Julia’s roommate was killed and she was found trying to burn her bloody clothes. Tommy wants to know why Tanner is taking this case on. Tanner admits that this is the biggest lead in his daughter’s case. He needs to do it.

Tommy sits down with Julia to question her. Julia met her roommate on the internet. She needed a place to live so she moved in. The girl was crazy. She slept with married men and used drugs.

Sara sits for her deposition. She recalls how she and Tanner but heads over user engagement. She takes a call from Tanner. The two talk about marriage to keep her in the country. She scoffs at the idea of marrying, sending Tanner into silence. She apologizes for her reaction.

Tommy and his partner question neighbors about the death of Tammy and Julia. Back at Sophe, Tanner and the team chat with a user. She informs them that Tammy was a mistress to a big wig company owner. Tommy calls him in to get his alibi. The man confesses that he was sleeping with Tammy. His wife found out. She busted up his car. He doesn’t plan to cheat again. Tommy leaves the room. His partner shows up with information. She knows he is lying.

Sara is back in her deposition. She questions her about her happiness on the job. Meanwhile, the team gets new information on Tammy. She faked a pregnancy to trap her married boyfriend. Tommy calls him back in. He admits that she told him she was pregnant. He offered her money to take care of it. He doesn’t need more kids, he already has a family. Tommy accuses him of murder again but he has an alibi. He left Tammy’s at 8:30 and went to his second girlfriend’s house. They call her and his alibi is backed.

Tanner gets new information from 2 charter schools students. They have found the motorcycle that was parked outside Tammy’s the night she was murdered. Tanner runs to the scene after telling the girls not to touch anything. He sees what the girls found – a bloody rag and knife in the bike’s compartment. Tanner calls Tommy. The police arrive. It’s Julia’s bike.

Tommy and his partner bring Julia in. She laughs at them. Someone planted that on her bike. Tanner can’t take it. He is watching from the outside. He busts in the room and talks Julia into talking. They just want the truth. Julia recounts the night. She came home high to find Tammy dead and bloody with a knife sticking out of her. Julia freaked. She knew she would be accused of her murder with her record. She left to burn her clothes. Tammy and the knife were taken away as far as she knew. The police know that the knife wasn’t logged in as evidence. Tanner thinks the killer snuck back in to get the knife and later planted it on Julia’s bike. Tommy thinks it is a reach.

Sara recalls the night she and Tanner successfully used the prototype for Sophe. She asks them to take a break. Outside, Nell asks Sara why she wants to stay on with Tanner. She has no future with his platform.

Tommy and his partner think they know who could come in and take the knife quickly before the police arrived, the building manager. Meanwhile, Sara wraps up her deposition, before leaving the room she gets a call from a woman who has some questions for her. She is from Bay Area Celebs. She wants to send Sara some pictures and would love a comment on them. Before Sara can ask her more she hangs up. Sara checks her texts. The pictures are of her and Tanner kissing.

Sara returns to Sophe to tell Tanner about the text. It Is clear the team already knows that she and tanner are together. Sara makes an announcement. They all take it well.

Tommy and his partner release Julia after arresting the building manager for murder.

Tanner meets with the prisoner again. He tells Tanner about a lawyer whose name he doesn’t know came to see him. Tommy gets the video footage of the lawyer singing in at the prison. Tanner sends it to Sophe so that the users can help identify the man.