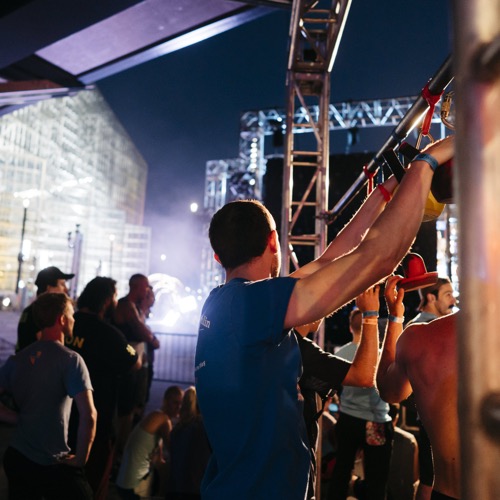 Tonight on NBC their obstacle course competition American Ninja Warrior returns with an all-new Monday, July 9, 2018, episode and we have your American Ninja Warrior recap below! On tonight’s “Minneapolis City Qualifiers,” season 10 episode 6 as per the NBC synopsis, “A qualifying round in Minneapolis. Competitors take on six obstacles, including “Double Twister” and “Diamond Dash.” Nina veterans making their return include: Meagan Martin, Joe Moravsky, Lance Pekus, Maggi Thorne and Sarah Schoback.”

The show had apparently never been to Minneapolis, Minnesota and tonight’s all new episode of “American Ninja Warrior” was the city’s first ever Qualifiers.

The obstacle course tonight was the Floating Steps, then the Double Twister, the Ring Jump, Diamond Dash, the Battering Ram, the Warped Wall however two of those obstacles were new and there was same stipulation for both versions of the Warped Wall as the last time. The contestant has one shot at the Mega Warped Wall and upon failing they’re left with one chance at the regular Warped Wall. The first person to test out this new obstacle course was Dr. Cody Sessions. He was newbie this year and was in his thirties. The odds for him making through to the Warped Walls wasn’t that great to begin with and so the audience really began to root for him when it looked like he did have what it takes.

Cody made it past the Double Twister and he was finishing the Ring Jump when he hit his head. His head began bleeding and that might have caused him to accidentally splash his foot in the water. Cody hadn’t gone in fully, but he had been eliminated because one foot was enough to disqualify him and so he went back into the audience where he will be looked at by the medic. The next contestant to give the obstacle course a go was Isaac Mitchell. He had been quite a funny guy and his friendship with an elderly woman he could workout with had been sweet to watch. Only it hadn’t prepared him for the course as much as he thought because he fell during the Double Twister.

Once the guys had crashed out, it had been time for the female population to show what they could do. Jenn Roder had been going through cancer when her friend introduced her to the show and supported her even as Jenn went into remission. So just being out there on tonight’s episode had been huge. Jenn had wanted to use her fighting spirit to get through the obstacle course and had done her best all the while the crowd chanting her name. Jenn had made it through the first two obstacles with only some minor problems here and there yet she had hard time on the Ring Jump which was a test of upper body strength. Jenn hadn’t been able to hold on for long and ultimately dropped in the water.

Jenn’s run had been inspirational. The guy after her had been a little gross because he had been advocate for eating insects. Eric Middleton was a student. He was studying bugs and thought eating them offered both animals and mammals a great amount of protein. Eric showed that he wasn’t afraid to eat insects and he brought along a fried spider for the commentators. The commentators had decided to take him up on that challenge and said they would eat it if he paid it to the Warped Walls though they probably hadn’t thought he would make it that far and so they had been in charge because Eric had proven to be quite formidable. He had raced through the course and had become the first person to complete the whole thing when he made it up the regular Warped Wall.

So you know that means! The commentators had to share a spider and they actually did it. They split in half and eat a deep fried spider. Eric had been so pleaded by the sight of that that he mentioned to Christine he might have a spider for her as well at the City Finals. She said she would never do it only who knows maybe she could change her mind. Anyways, during the commercial break, there had been one shocking elimination. Dan Yager had faced problems with the Ring Jump and fell into the water on that obstacle. It had shocked everyone and it had most likely ended whatever chance he had at that City Finals. And so the night had had to move on without him or anymore spider eating.

The next contestant had been Austin Gray. He had given up his kidney earlier in the year to a friend who suffered a condition that caused her kidneys to scar over and so Austin was running this obstacle course in the hope it would convince others to donate their “spare” kidneys. Austin also had a great start to this course and he had made it to the obstacle course where he went after the Major Warped Wall. He unfortunately hadn’t made it up the Major and so he tried out the regular Warped Wall although he also failed to make it up that one as well, so his timing as well as how far he made it through the course had been enough for him to make it to the finals. The next contestant had been Dan “the bowling ninja” Delano and he had been the second person of the night to hit the buzzer.

Then it had been Maggi Thorne’s turn and she too fell on the Double Twister. It would be the same obstacle that would knock out Gavin McCall who rose to fame with his daughter Lylah when she ran a ninja obstacle course built in her backyard. The video of Lylah had gained ten million views and the now famous little girl had wanted her father to triumph however the Double Twister was trouble. It twisted people around until sometimes they weren’t even in the right direction when they tried to transfer to the next one. It had also knocked out Sarah who had supported Jenn through her own run and so it might be the bane for many to come. It had knocked out known names and many had fallen victim to it during the commercial break. And so it was the destroyer of dreams until Lance Pekus.

Lance Pekus was known as “the cowboy ninja” and he had taken some time from training to be with his wife. His wife was diagnosed with MS last year and she still came out to support him tonight. Lance raced through the obstacle course with ease and he had tried to get up the Major Warped Wall but fell woefully short and so he went after the regular Warped Wall. That wall had been a problem for him and Lance became the third person of the night to hit that buzzer. Only the contestant that followed Lance had been Abby Clark. Abby had been the first woman to make it past the Double Twister and she eventually became the first woman as well as the fourth person to hit that buzzer tonight.

Enedina Stanger had wanted to be the next woman that did so. She was first introduced to the show three years ago when she had been sitting in a wheelchair and her husband was making his first run. This time around it was her turn and she wanted to show far she could come. Enedina had been diagnosed with a condition that was slowly eating away at her and even her doctors believed she wouldn’t live another year however its been three years since that diagnosis and she had wanted show how far she came by running the obstacle course. It had been difficult during practice because her joints still hurt till this day and she hadn’t made it through the first obstacle because she had mistimed it yet her run had still been the most memorable of the night.

The next contestant to have their run was Ian Dory. He had no problems with the obstacle course and he had hit the buzzer on the regular Warped Wall making him only the fifth person to complete the course. After him, it had been funnyman Jake Murray’s famed return. Jake had always made it to the second round of American Ninja Warrior until he shocked everyone by falling last year and so he came back with something to prove. He was more focused this time around and it showed because he managed to hold on even as there were several missteps along the way. Then when it came to the Warped Walls, he had tried to go after the Mega and hadn’t made it. He could have taken a moment before going after the regular Warped Wall and well that wasn’t his style.

Jake went after the Warped Wall without hesitation and he became the sixth person to hit that buzzer. The next contestant to do so had been Dalton Knapp. He had beaten out his brother who had fallen on the Battering Ram and had gone up the Warped Wall with ease. The next ninja had needed no introduction. Meagan Martin was so famous a ninja that she was even on all the official posters and so everyone was expecting Meagan to be the next person to complete the course. She attacked the first obstacle more aggressively than normal and was making good time until she came up against the Battering Ram. She had been doing fine at first until she lost her hold and fell into the water thereby shocking everyone. Most especially her biggest fan who went on to say she had been a little great today.

Thankfully, Meagan’s run had been successful enough to guarantee her a spot in the City Finals and so she had in fact been more than just a “little” great. The next contestant to hit the buzzer had been Tyler Gillet who had gone after the regular Warped Wall during the commercial breaks and had no problem with winning himself a spot in the next round. So the last ninja of the night had been Joe Moravsky. He had become a well-known name since his run six years ago and had had no problems with the obstacle course. He had raced through it with the fastest time and he had tried to go after the Mega Warped wall though was unable to hold on. He had gotten one hand up on that ledge and had been forced to let go. And so when he hit that buzzer, it had been on the regular Warped Wall and not that surprisingly he had been disappointed in himself for not being able to conquer the Mega!