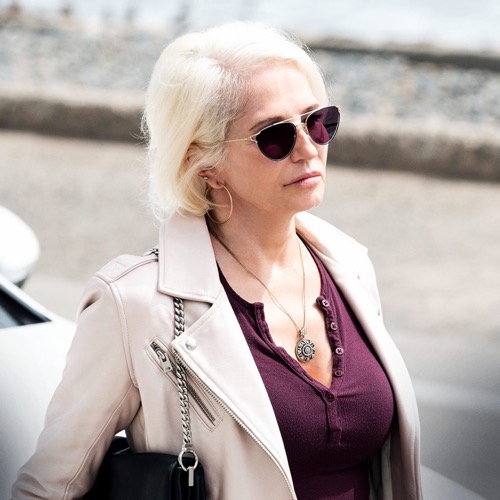 Tonight’s episode of Animal Kingdom looks like it is going to be great and you won’t want to miss it, so be sure to tune in for our live Animal Kingdom recap at 9:00 PM ET! While you wait for our recap hit the comments and let us know how excited you are about the season 3 episode 13 of Animal Kingdom.

J did the worst thing he could in his world. He stole from his boss and she was going to want revenge for that. It didn’t matter that Smurf was also J’s grandmother and that she had taken him under her wing these last few months. Smurf didn’t forgive anyone. She had killed another boy she had raised because he stole from her and so she would have no problem with killing J. J knew this and that’s why he tried to cover his tracks. He stole from his grandmother and then went about trying to frame someone else for the crime. J tried to frame Morgan. Morgan was the family’s lawyer and she helped Smurf clean out the money, so Morgan was smart enough to hide something if she did actually steal it.

Except Morgan hadn’t stolen a thing. She had talked to J beforehand about him selling properties to her and that she would then sell them for a profit for the family, however, J had been too smart to go ahead with that plan. He figured that Morgan was trying to take advantage of him and had turned down her off back then. J then went on to forget about the encounter until one the day he wanted to betray his grandmother and remembered that Morgan taught him how. He pretended to everyone that mattered that he had signed whatever documents Morgan had put in front of him and the truth was he handled the transaction. He sold several of Smurf’s properties to several business holdings and then he pretended that Morgan had been the one to sell them.

J had used Morgan’s idea against her. He did that to make the story he concocted to sound real and boy did it seem real at first. Morgan was made out to be ambitious. She was the one that took control of the properties and then sold them behind Smurf’s back for a profit. Afterward, she tried to hide what she did and had thought she was in the clear when Smurf confronted her. Smurf had demanded to know why Morgan would sell her out after knowing her so long and Morgan had said she did. She also asked for time to clear her name and Smurf had given her that. She gave Morgan a couple of days to find out who had stolen from her and so that’s when J stepped in. He decided to further frame Morgan by killing her.

J killed her and then made it look like Morgan had run off after she knew she had been caught. It had made Morgan look even guiltier and, for a while, it worked with Smurf. Smurf thought Morgan had run off and had suspected the woman might also want to turn in evidence against her. So Smurf wanted to find out what else Morgan had been hiding. She went to Morgan’s house to see what she could find there and she took Pope with her. Together they searched through everything until eventually, they found some paperwork. They then followed the paperwork and there were several times when someone made it look like Smurf’s own children had stolen from her. She found paperwork with their names on them and Pope had denied it all.

Pope would know if either of his brothers had moved again her and so he assured her that they had stolen the buildings. He was even willing to prove that by continuing to assist his mother. They tracked down the notary republic on all the forms and it led them to an old man with dementia. He still had all things from when he was a notary and so someone used that while the man in question wasn’t able to stop it, so Smurf took a good look at who could have done it and she fingered J. J lived several blocks from the retirement home and his story began to unravel the longer Smurf thought about it. Smurf knew J wasn’t dumb and so he wouldn’t sign something without reading it. J would take every bit of care of the properties as Smurf would. And that’s what finally made her suspect him.

Smurf talked to J and she asked if he’s as smart as he thought he was. J had gotten so frightened from that conversation that he began to burn whatever led to him and then he waited. He waited until Smurf made a move and had then been surprised when Smurf did the unexpected. Smurf had had Mia sent to Mexico and Lucy had been killed on Smurf’s orders. She then sent a prostitute to Pope and then Pope reeling. He wasn’t good with affection and had broken down when there was no one around to help him. Pope had luckily gone to his ex-girlfriend’s place and she had helped to calm him. And when Pope returned home, it was to find his mother still up to her games and the rest of the family having to deal with it.

Both Deran and Craig had been called by their mother who gave them properties as part of their investment in helping her to deal with Lucy and J had even gotten a package. He had gotten a watch that was supposed to have gone to Baz and had still had the nerve to threaten his grandmother while she was sleeping. J had come out of the room to find Pope had been watching and surprisingly Pope hadn’t cared about what J was doing. He let his nephew go without saying anything and now J doesn’t know what was going on.

Did Smurf threaten him because she still didn’t trust him from a few months ago or does Smurf know who robbed her but wasn’t saying anything?

Smurf meanwhile had managed to leave J both on edge and relieved. She also may have played a part in getting rid of Deran’s boyfriend by turning him into the police and so that along with the odd way Frankie disappeared out of Craig’s life means there’s no one special in any of the Codys’ life. They had each other, their work, and their mother!