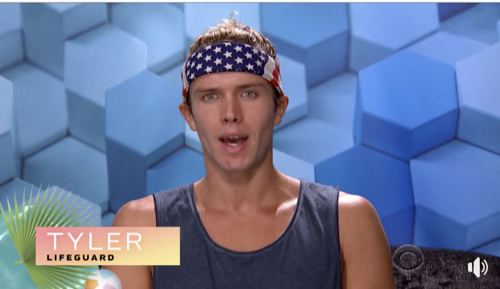 Tonight on CBS Big Brother airs with an all-new Thursday, August 2, 2018, episode and we have your Big Brother recap below! On tonights Big Brother season 20 episode 17 as per the CBS synopsis, “Following a live vote, a Houseguest is evicted and interviewed by host Julie Chen. Remaining Houseguests compete for next Head of Household.”

So make sure to visit Celeb Dirty Laundry for our Celebrity Big Brother US recap between 9 PM and 10 PM ET.  While you wait for our recap make sure to check out all our BB20 recaps, videos, news, spoilers & more, right here!

Tyler didn’t use his Veto because he didn’t want to rock the boat. Bayleigh is thrilled, she wants Brett out and she thinks she has everyone’s votes. Meanwhile, Brett is confident that he is going to stay int he house because Rachel has been rubbing people the wrong way. Angela hopes Rachel calms down because she is causing trouble within their alliance. Tyler goes in the HoH room and hugs Bayleigh, she tells him that trusts him now 100% and knows that he has her back; little does she know that he would put her on the block in a second if he had to.

Brett tells Tyler and JC that he doesn’t feel good, he thinks he may be walking out the door and then the majority in the house will be girls. JC doesn’t know what he is going to with his vote. Tyler asks Sam who she would vote out, she says anybody he wants her to.

Scottie goes into the HoH room and counts the votes and determines that he has five votes against Brett.

Tyler meets with Brett, he tells him about Bayleigh’s power app. Brett thinks it is interesting and wants to figure out how he can use it to his advantage.

There is a little jealousy in the house, Hayleigh is in the hammock with Brett and Faysal doesn’t like it. Brett asks Hayleigh if she is a thing with Faysal and she says no. Faysal is now questioning Hayleigh’s gameplay and he should be because she told Brett that she is pro, Brett.

We get a look at Swaggy C outside the house, he goes to meet Bayleigh’s family at their house. Swaggy C tells them that he is in love with Bayleigh.

Time for the live vote and eviction. Rachel and Brett give their final pitch for votes to keep them. In Brett’s speech he tells everyone that Rachel told him about Bayleigh’s power app and that she is in a secret alliance with the women called the Man-Eaters; all lies.

Rockstar is first up and she votes to evict Brett, Angela for Rachel, Kaycee for Rachel, Scottie for Brett, Tyler for Rachel, Sam for Rachel, Faysal for Brett, JC for Rachel, Hayleigh for Brett. It’s official, Rachel is leaving the Big Brother house. Rachel leaves angry and doesn’t give any hugs, she arrives in the chair near Julie and is crying. Bayleigh looks upset, Rockstar is shocked.

Rachel tells Julie that Bayleigh told her she was just a pawn, she is in shock. Julie tells her that it was her alliance that evicted her.

Time for the HoH competition, it is called GIF that keeps on giving. Earlier, the houseguests had an opportunity to study GIFs on the memory wall. Julie will now ask them true or false questions about those GIFs. Kaycee is the first one out, then JC, Sam, Faysal, Tyler, Scottie, Haleigh. It is down to Angela and Rockstar, a tiebreaker. Angela is the new HoH.

Julie announces that there is a new twist, the Hacker Competition. Each week one houseguest will win the power to secretly hack the game.