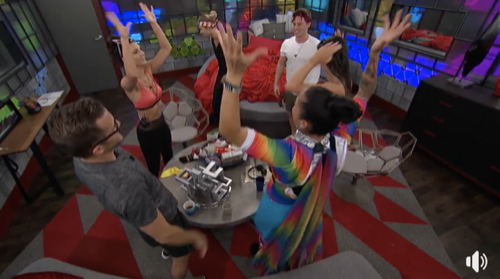 Tonight on CBS Big Brother airs with an all-new Sunday, August 26, 2018, episode and we have your Big Brother recap below! On tonights Big Brother season 20 episode 27 “Nominations,” as per the CBS synopsis, “The new Head of Households takes power and nominates two Houseguests for eviction. Hosted by Julie Chen.”

Faysal thinks his HoH was brilliant, he is excited about his new alliance with Tyler and Angela. The HoH competition continues, Sam has all these tokens and could compete, but instead, she makes Haleigh and Brett promise not to put her up and gives them some of her tokens. Angela wins HoH with a score of 39, nobody even gets a score saved on the board.

Haleigh has mixed emotions; she and Faysal made their new alliance but she is still worried. Meanwhile, Faysal feels great because he believes Tyler and Angela.

Haleigh walks into one of the rooms and sees Kaycee, Angela, Tyler and Brett ecstatically celebrating and finds it confusing because she and Faysal should be celebrating with Tyler and Angela.

Level 6 wants Angela to put up Faysal and Haleigh but she is worried, that will put blood on her hands and not be good for her game.

Haleigh tells Angela that if she wants to put up Sam, she will go alongside her as a pawn.

Haleigh and Faysal have a disagreement, he basically told her to stop talking in front of Tyler. Haleigh feels like Faysal spoke down to her and she doesn’t like it.

Tyler and Angela both have a crush on each other, but both are not going to have a showmance and ruin their game.

JC goes in to speak to Tyler and Angela, he suggests that Angela put up Haleigh and Faysal.

Faysal still thinks Angela is going to make the right move, Haleigh doesn’t think the same. Faysal goes to see Angela, he asks her what she is going to do and she says she is pretty sure that Haleigh is going to be a pawn. Faysal says he guess it makes sense.

Time for the nomination ceremony. The first houseguest nominated is Haleigh, the second is Faysal, and he is shocked. Angela tells them a quote, “you’re a day late and a buck short,” because going to her on day 60 something to form an alliance raises suspicion. Faysal didn’t see this one coming and he feels really stupid. JC is thrilled, his plan is working week after week.