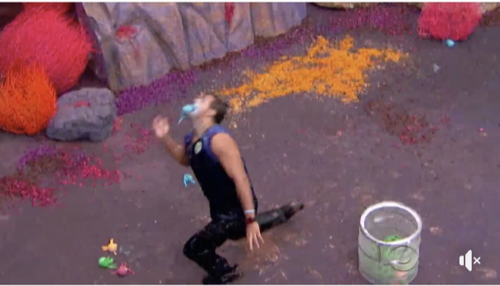 Tonight on CBS Big Brother airs with an all-new Sunday, August 29, 2018, episode and we have your Big Brother recap below! On tonights Big Brother season 20 episode 28 “PoV and Ceremony,” as per the CBS synopsis, “Houseguests compete to win the Power of Veto. During the Veto meeting, the winner of the competition can keep nominations the same, or save someone from eviction for the week. Hosted by Julie Chen.”

Haleigh knew something like this was going to happen, she and Faysal put up on the block – she just wishes he had listened to her.

Angela’s target is Faysal, she is not too worried about her, she gets her out the following week.

Faysal is feeling remorse, he tells Haleigh he should have listened to her. Haleigh reminds Faysal that Zingbot called him a moron because he put on his own alliance members on the block. Faysal stars recapping everything stupid they both bid and they know they made some bad decisions in the game. Haleigh says they are the worst Big Brother players in history.

In the HoH room, JC is talking to his alliance and they all hope that Sam does not win Veto because she might remove Faysal off the block.

Sam didn’t want to get picked but now that she is, she wants to win and guarantee her own safety.

Haleigh visits Angela in the HoH room, they hug and start to talk. Angela basically tells her that Faysal is the target, regardless, the only one she will feel safe is if she wins the Veto.

JC is talking to Faysal and he tells him to look at the positive, at least he wasn’t backdoored. In return, Faysal tells JC to smarten up because his alliance is going to pick him off next week anyway, he is next.

Time for the Veto competition, this one is called “Mission to Planet Veto.” The backyard looks like an alien planet. Essential the houseguests will have balls thrown at them and they need to catch them without them falling on the ground. The houseguests who catch the most wins the PoV. Meanwhile, during their competition, slime and water is being thrown at them which is just making the competition so much harder. In the last round, the house guest has to catch the items with their mouth.

Haleigh is first and she doesn’t do too well, Kaycee is next and she does a lot better. Sam is next, she does wors than Haleigh. JC is up, he has never won a competition and is looking forward to this one – he is the worse one so far. Angela and she does well, but not sure if she is better than Kaycee at this point.

Faysal is last and is ready for this competition, he is the only one to catch a ball in the first round of three.

Kaycee is so excited, she feels like she won a championship game, Level Six is safe this week. Faysal can’t believe he loses by one point.

Haleigh is 100% confident that Kaycee is not going to use the Veto and she knows that she has to socially integrate herself into the house and prepare for when they vote Faysal out. Faysal is upset, he doesn’t like that Haleigh is spending her time with the rest of the house.

Faysal and Haleigh get into an argument, he tells her that he doesn’t like that she was in the HoH room with everyone else. Faysal then goes to do his own thing and now wonders if Haleigh’s feelings were just a game and not real.

Brett feels bad for Haleigh, she is crying- she tells him that she is sad. Brett figures if Faysal is going home, he might as well cozy himself up to Haleigh to himself and get her in his corner. Brett asks if they were a showmance and she says no way.

Time for the Veto meeting. Haleigh doesn’t have much to say, she is respecting Kaycee’s decision. Faysal says to use it to benefit herself. Kaycee does not use the PoV, game wise, she believes it is best to keep the nominations the same.