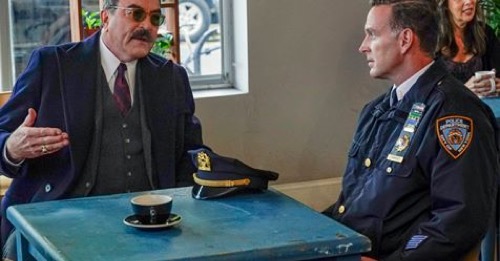 Tonight on CBS their hit drama starring Tom Selleck Blue Bloods airs an all-new Friday, December 7, 2018, episode and we have your Blue Bloods recap below. On tonight’s Blue Blood Season 9 episode 10 Fall Finale “Authority Figures” as per the CBS synopsis, “A video surfaces of officers partaking in a clear case of entrapment, and Frank focuses on finding the cop who leaked the video.

Also, Eddie retaliates against a co-worker who is pranking Jamie; Danny and Baez investigate the murder of a tabloid writer who worked in the hip-hop scene; and Erin gives a high-profile case to a young ADA under her tutelage.”

A man named Carl’s truck stalls and when he goes to call it in, some locals on the street open the back and begin to steal the contents. The police quickly arrive and make arrests. The whole thing was taped and the footage released. Frank wants to find out who leaked it.

Danny and Maria arrive on the scene, a woman, Charlotte Huntington, is face down and dead on her carpet. There is a lot of hip hop memorabilia in the apartment and Maria is surprised that a 30 year old white girl would have that. Charlotte has a Wikipedia page, she seems to have it in with all the major players on the hip hop scene.

At roll call, Jamie’s badge is upside down, this is the second prank in weeks.

In court, Anthony and Erin are watching Martin try a case and are surprised when he doesn’t even make an effort to win it. Erin tells him that he had to give it his best shot and he didn’t, Martin tells her to tell it to the judge if she has a problem.

Frank is in a heated back and forth with a Lieutenant about why the footage was released, he says he doesn’t know. Frank tells him: “Well, I’m going to find out. You sure you don’t want to save me some time?” the Lieutenant claims to know nothing.

Erin wants to look for more information against Healtey, Anthony tells her that she should never have given the case to Martin. Erin calls in Martin and tells him that she can’t believe how he handled this case, it is not like him, he is usually very thorough. Erin asks Martin if Heatley got to him, he says no, but he got to his mom and sister, sent some goons after them.

Martin leaves the room and Anthony tells her that she is not truly a boss until she has fired someone.

Danny and Marie go to see Cameron Gooding, a guy named Marty comes out, he is Cameron’s partner and says he is broken up. They meet Cameron and Maria asks him what he can say about the murder of Charlotte, he says sadly. Maria says the last few stories she wrote about him were harsh. Danny says that people have been killed over stupid things before. Danny asks Cameron if he was aware of the book she was writing, he says yes. Danny asks where he was two nights ago, he says in the studio, Danny asks for proof, he asks if he has a warrant.

Wallace is upset that someone double-locked his cuffs and blames Jamie, but Jenko did it and she tells Jamie that he had it coming.

Sydney speaks at a press conference but loses it when he is challenged and shouts that it was a sting operation that some low lives walked in to, end of story. Garrett tells Sydney that when you yell end of the story to reporters, there is more to the story. Frank asks Sydney what the hell he was thinking, he says that he was speaking for the NYPD and defending Lieutenant Harvey. Syd is upset and Frank tells him to take it easy. Information has come out that the tapes were leaked by a detective Justin Powl and he went to great lengths to try to stay anonymous.

At Reagan’s dinner, they start talking about how Christmas decorations are put up too early. They get into a discussion about family traditions.

At the station, Jamie tries to open his locker and the lock won’t work, he blames Wallace and tells him that until he stops the pranks, he is going to ride with him.

Erin terminates Martin for how he handled the case.

Wallace and Jamie respond to a burglary in progress, Jamie runs after the guys with Wallace behind him. Jamie shoots one of them, then the other gives up. Wallace tells Jamie that was some good shooting, Jame tells him good work.

Frank and Garett meet with Powl, he says that he released the video because he wanted to bring it to their attention. Frank tells him that he is suspended.

Danny and Maria are back to see Cameron and tell him they know he was sleeping with Charlotte. Cameron says that they loved each other, Danny reveals to him that Charlotte was just using him.

Anthony and Erin discuss Martin, she tells him that she is surprised Martin was carrying a gun. Anthony gets a call, Martin is outside Heatley’s place watching him.

Anthony and Erin go and meet up with Martin and tell him what he doing is wrong. Heatley shows up and calls it harassment that all three are there. Erin tells Martin to leave, he wants his weapon that Anthony took from him, but he won’t give it back here, he tells him to meet at his office tomorrow.

Cameron and Marty share a drink, Cameron said he would kill for Marty and asks if he would too. Marty says he took care of business, their business. Cameron tells him that he is a good friend, then goes to thank him and smashes a decanter in his face as Danny and Marie come in to arrest him.

At a bar, Wallace tells everyone how Jamie caught the burglars earlier in the day. Wallace says that it wasn’t him doing the pranks, Jamie tells him that as long as they stop, all is forgiven.

Martin picks up his gun and leaves evidence for Erin that can put Heatly away.

Powl goes to see Lieutenant Harvey and tells him that he was suspended. Harvey realizes then that Powl released the video. Frank arrives and asks if everybody knows everything. He says that he comes from a cop family. A cop family with black and white cops is almost unheard of. He has taken a look at Harvey’s stats and there are a lot of question marks, there better be no more. Then Frank turns to Powl and tells him that he better have Harvey’s back from now on. Frank gets up and leaves.