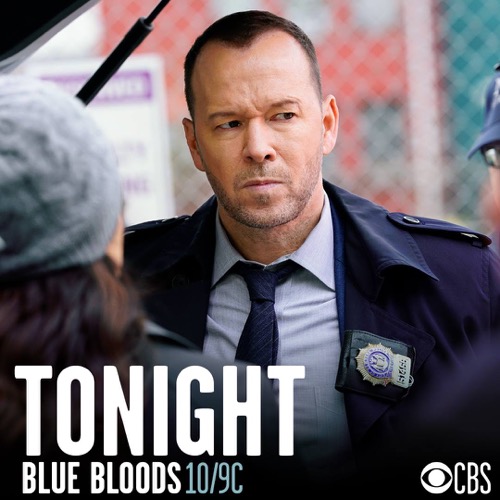 Tonight on CBS their hit drama starring Tom Selleck Blue Bloods airs an all-new Friday, September 28, 2018, episode and we have your Blue Bloods recap below. On tonight’s Blue Blood Season 9 episode 1 “Playing With Fire,” as per the CBS synopsis, “In the Season 9 premiere, Danny takes on a personal case involving a drug cartel member, Louis Delgado, who Danny believes is responsible for torching his house, and Erin is given a promotion in the DA’s office but finds herself in a challenging situation when both Danny and Jamie ask her for help with their investigations. Also, Frank and Jaime have a disagreement when Jamie refuses to stop riding with Eddie.”

Blue Bloods begins tonight with Danny Reagan (Donnie Wahlberg) and his partner, Maria Baez (Marisa Ramirez) at the beach, where they have a “headless floater”. He has a tattoo of a black hand on his hand, indicating Mexican mafia.

Meanwhile, Erin Reagan (Bridget Moynahan) is promoted to Bureau Chief and shown her new office. She is shocked, wondering if this is about Monica’s murder. She’s told there is no room for emotion and sympathy and to watch out as people will be watch her closer than ever. She insists on staying in her own office and Anthony Abetemarco (Steve Schirripa) as her investigator. She is grateful for the job but wants to be comfortable where she is.

Garrett Moore (Gregory Jbara), Sid Gormley (Robert Clohessy), and Abigail Baker (Abigail Hawk) have their morning meeting with Police Commissioner Frank Reagan (Tom Selleck); but seems completely zoned out. He informs them that his son, Jamie Reagan (Will Estes) and his partner, Eddie Janko (Vanessa Ray) got engaged on the weekend; they are all thrilled until they learn the two plan to continue to ride as partners. The four debate how it isn’t against regulations and maybe Frank should put it on the books and order against it, Frank tells Sid to draw one up.

Suddenly, Jamie and Eddie come upon a house on fire and both breech the house to rescue the people inside. Jamie is able to find the woman inside the house as Eddie says she is right behind him, he leaves the house but it explodes while she is still inside, leaving Jamie screaming her name from outside.

The firefighters try to stop him from going back in but he rushes past them and together they are able to save another victim before the ceiling collapses on them. Once outside, Jamie gets int a fight with one of the firefighters who calls him an “ass” for going back into the fire. They find the boy, Justin Matthews who was outside the house when they saw the fire, asking him if he knows how the fire started. He smells like gasoline as Eddie is furious he almost got them killed. Jamie arrests him.

Danny and Baez question their victim’s husband. She reveals that Manny was a drug runner, who was trying to get out of the life until a few days ago where he gets a text demanding him to deliver 40 kilos of drugs, but Manny turned the job down; which isn’t allowed. Baez wants to know which cartel and she reveals the name of the gang and hitman’s name is “the Panther”.

Eddie and Jamie question Justin about who told him to set the fire, but he demands a lawyer.

Baez reveals to Danny that the Panther is really Luis Delgado, and he isn’t in the system because he doesn’t have a record; the only reason she knows about him is because he is on the DEA’s radar too. Danny learns that according to the DEA, it was Delgado that set Danny’s house on fire.

Jamie arrives at the Commissioner’s office, salutes and won’t lower his hand until his father does. Once they are sitting, Frank admits he has a little more than reservations about him riding with Eddie reminding him that his CO has to be informed they are together and he needs to find the opportunity to tell them or Frank will. Jamie promises them being together won’t affect his performance but Frank demands to know why he got into it with the firefighter as he was not going back into the house to get his partner – he was going back to get his fiance!

He tells Jamie to stop “lawyering” him. Jamie says he is the Commissioner’s son and is waiting for him to make an exception for him. He wants to know what would he do if they get married and both of them get taken out in the same action; what is he supposed to do with their kids? Jamie walks out without answering him.

Jamie visits Erin at work, congratulating her on her promotion; but she knows better. She says Justin is being charged with murder but he wants her to sit on it as someone put him up to it. She is angry that him and Danny keep doing this to her. He thanks her as she yells that she can’t sit on stuff every time they have a hunch.

Baker informs Frank there is a 10-minute delay and shares her reasoning on both sides in why they should and shouldn’t sign this new rule. She doesn’t agree with him making this new rule, but orders her to tells his detail he is ready.

Anthony brings Erin her lunch as they discuss their new responsibility. She reveals he is the only person she truly trusts. Danny walks in demanding a warrant for Luis Delgado, the man who set his house on fire; revealing everything he knows. She says until the ME rules Manny’s death a homicide she cannot issue a warrant because it will look like she is doing him favors. She insists the facts don’t act up, but he says this is not a favor as the house where his kids and wife slept burnt down and storms off.

Danny and Baez go into Luis Delgado’s house, where she advises him they shouldn’t be there without a warrant. Suddenly she is knocked down the stairs and Danny holds a gun to Delgado’s (Lou Diamond Philips) head, introducing himself as Detective Daniel Reagan when Delgado says they never identified themselves as cops so he didn’t do anything wrong.

They bring him into interrogation, where he says they violated his rights and tells them be doesn’t know a Manuel Sanchez nor the name “Panther”. When he keeps insisting he doesn’t know anything, Baez says she will get a pad and pen so he can write he knows nothing, the second she leaves the room, he taunts Danny, saying he house went up like a stack of kindling and his only regret was Danny’s family wasn’t in it at the time. Danny goes to attack him but Baez pulls him off, reminding him they have to do everything by the book on this one. Delgado laughs at him.

Erin questions Delgado, who denies torching Danny’s house and only attacked Baez because they were trespassing. Delgado’s lawyer says they have no proof nor any evidence and have to let him go because what they did was illegal. Erin talks to Danny outside the room, telling him they need proof as no one is going to take his word over a man who has no record and orders him to “cut him loose!”

Jamie takes Eddie back to the building that exploded and they learn that the owner was desperately trying to get rid of the couple that was there, as he was trying to get rid of the place. Jamie looks at Eddie and tells her, that was a motive. Anthony tells Erin about the victims being “holdouts”; they learn that Justin is the owner’s son and he is the one who convinced his son to torch the building, she wants Anthony to convince the son to come in.

The Reagan family gathers for family dinner, where Frank welcomes her. She feels the dinner is amazing and compliments Erin on the potatoes. She says that their mom made them. Danny wants to know if there is any proof or evidence that she actually ever made them; Erin tries to defend herself as Jamie says from where he sits at the table, you can be accused of breaking rules that don’t even exist.

Frank attempts to defend his actions as Nicky (Sami Gayle) says breaking an unwritten rule is hard to prosecute. Henry “Pops” (Len Cariou) tells everyone to take a step back but admits he agrees with Frank on the Jamie and Eddie issue. Danny gets a call from Manny’s girlfriend but learns it is Delgado who has just killed her saying Danny messed with the wrong man. Danny says Erin should have charged Delgado when she had a chance and races out the door. Eddie ignores everything around her, and enjoys her food; Frank seems amused by her.

Jamie and Eddie walk as she is surprised how family dinner was different than she expected. She says they need to think about them not riding together; she doesn’t care about riding together, she simply wants him! At home, Frank and Henry talk about Jamie and Eddie’s dilemma; Henry gives him some sage advice about how to cope with it and instead of celebrating their happy news, he made it wrong about them riding together. Henry says he is also missing the fact that they now have another cop in the family and another reason for their hearts to stop when they hear “officer down” over the radio. Frank lets out a deep sigh.

Erin apologizes to Danny but suggests they get him on drugs, giving him a warrant on Delgado’s cell phone for the text messages after the murders and tells him to get to work.

Danny, and Baez are able to confirm Delgado is there and the team moves in. Initially they arrest him and all his men, but after they talk. Danny uncuffs Delgado only, thanking him for everything he has done, loud enough for all his drug runners to hear. He tells him he is free to go. Baez asks Danny if he knows what he is doing, he says everyone hates a snitch.

Erin tells Jamie they just got a confession. She then tells him that their dad isn’t worried about department policy when it comes to him riding with Eddie, he is simply worried about it put him into danger. Jamie wishes he would just cut them some slack; Erin says he should cut their dad some slack too.

Danny and Baez arrive at the beach where there is a headless corpse, where they are sure its Delgado. Baez asks if he is okay. Danny admits nothing is ever over and closure is overrated.

A plant is delivered to Erin’s office, where she is questioned about the warrant and only 6 men were arrested, yet the 7th was let go. He wants to know if it was what cops call a “public service homicide”? Erin shrugs her shoulders and she is advised to not over water the plant, that is the mistake most people make, keep the balance just right and it will last a lot longer. She promises to keep that in mind.