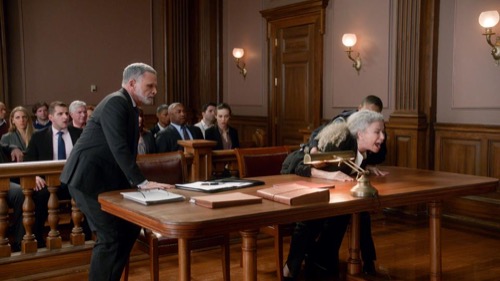 Tonight on CBS their  drama Bull inspired by Dr. Phil McGraw airs with an all-new February 27, 2018, episode and we have your Bull recap below.  On tonight’s Bull season 2 episode 15 as per the CBS synopsis, “The DA hires Bull to help convict Hazel Diaz, an infamous drug dealer who murdered a police officer but has managed to avoid jail for years on an insanity defense by feigning schizophrenia.”

ADA Gabrielle Ramsden woke Bull out of bed on tonight’s all-new episode of “Bull” because she needed his help on a case.

The case involved Hazel Diaz. Diaz was a well-known Brooklyn crime boss and she managed to remain out on the street because she’s been able to claim mental illness. She talks to people that aren’t there and see things that aren’t there, but Ramsden doesn’t believe the mental illness is a cover and she needed Bull’s help to prove that because this time Diaz went too far. She had killed a cop in front of a bunch of witnesses and was caught not far from the scene by the dead officer’s partner. The partner had gone inside really quick to grab something to eat and, by the time he came out, his partner was dead so he took this personally. And for that matter, the entire District Attorney’s office was taking this seriously.

They had tried to go after Diaz before and she always got off because of her lawyer. The lawyer would demand a competency trial and she would do her thing for all to see so that the judge remanded her to Bellevue Hospital where she would be released within six months. It’s a song and dance that both Diaz and her lawyer were familiar with. So Bull was the gamechanger here. He went to talk to Diaz before her lawyer could get there and he saw through her act instantly. Bull noticed that she displayed signs of schizophrenia as well as bipolar disorder as if she wasn’t sure what illness she was supposed to be faking and he also noticed she got really quiet when her lawyer did arrive.

Diaz was in a right enough mind to realize she didn’t need to talk anymore with her lawyer there and she failed to answer Bull’s last question. He had wanted to know how she was able to communicate with her lawyer when she was showing signs of suffering a mental break. Diaz, of course, couldn’t answer that question and so that told Bull he was right about her. She was faking mental illness and Bulla agreed to testify at her hearing. He later told the judge that she turned her illness on and off when it suited her and that true test on whether she was competent to stand trial or not as if she could speak in her own defense. She was able to do just fine when she was talking to her lawyer and so Bull said she should have no problem in court.

Bull had made such a case that the judge eventually ruled she was competent to stand trial. Now Diaz’s lawyer hadn’t liked that and Diaz for sure hadn’t liked that. She had given Bull a cold-eyed stare as she was being marched out of the courtroom and so she had let her mask slip for a second, but Bull thinks he could push her into doing that again. He had been hired by the DA to act a forensic psychologist on the case and so he again had talked to Diaz because neither she nor her lawyer were giving on the old insanity plea. They had again tried to claim Diaz was not guilty because of mental defect and so Bull had to question her again though he had had a plan by then. He decided to wear her down.

Diaz could only fake her condition for so long before she would naturally slip-up so Bull decided to test that. He had gotten permission to question her and had kept her in the interview room for seven hours. In all those hours, she tried to claim she couldn’t remember killing Officer Sampson or even seeing Bull that first night and so at first she was in control of herself. She just had to claim she couldn’t remember and unfortunately, after seven hours she forgot to say she couldn’t remember. Diaz instead claimed that she could remember hearing voices that night and that she had sung “Three Blind Mice” for Bull yet if she had been suffering a psychotic break as she claimed then she shouldn’t be able to remember anything.

Diaz had slipped-up and it had been caught on camera however Bull wasn’t sure if the video would be enough because he said the other side could claim that he bullied her into it. She had been in that room for hours on end and so Bull didn’t want to give her an out. He said the case would stick if they found out why she really killed Officer Sampson and had his people look into for him. They had gone through all the regular channels and it had taken them longer than necessary to find what they were looking for because they were their tech person. They still hadn’t heard from Cable and they’ve been trying to reach her. They called, they text, and they always been ignored because Cable didn’t want to come back to the office.

Cable had put her freedom and the reputation of the company on the line when she decided to help an old college friend. The friend had claimed her husband was innocent of hacking into Air Control and so she had double-checked for this friend though she had unwittingly set off the safeguards on the computer and erased state evidence. So she had been played. Cable eventually realized that in time and had only gotten out of prison because of Bull had pulled a few strings for her so Cable should have been thankful. She did get out of a life sentence after all. Cable just didn’t want to admit she was at fault and so she ran. She’s trying to find another job and she’s ignoring her friend who had to do their own tech work.

They found out Officer Sampson had more than half a million in an offshore account and they figured Diaz was the one paying him off. She most likely paid to look the other way and so the only person that would know for sure would be his partner. Officer Chambers must have gotten sent out for coffee numerous times and so he had a good idea of what was going on although describing in court was going to be difficult. He hadn’t wanted Sampson’s family to find out or the brotherhood and so Bull gave his information to the ADA who then used it on Chambers in court. She asked him about the money and then asked him what he knew. He hadn’t wanted tell her anything and so it was only with Bull’s support that he eventually confessed the truth. He told her that Diaz paid Sampson to look the other way and that Sampson was going to put an end to it on the night he died.

Chambers would have said more except that’s when Diaz decided to freak out in court. She scratched up her arms and started to bang her head on the desk because she figured she had one last chance at using insanity as a defense, but Bull had been on hand and he had told them to give her a sedative that would keep her condition calm or give healthy person seizures. So that’s when Diaz finally let up on the act and had tried to reach a plea deal with the ADA only Ramsden had been informed by a very flirty Bull that she didn’t accept it. She could finish out the trial because Bull knew she could win and so she did as he suggested and she got a guilty conviction that would ensure Diaz never get out again.