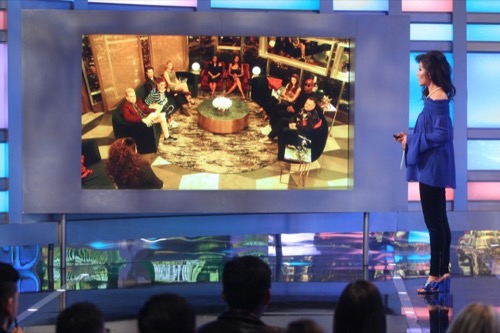 Omarosa is very emotional now having to play the game without Keisa but she is right to fight for her place to stay in the house every day. Meanwhile, Marissa can’t believe that everything went crazy before the live eviction and their plan to backdoor Shannon foiled.

Keisha wanted to go home to breastfeed her daughter and asked to be evicted which caused the plan to fail. Brandi is angry because Keisha is ruining her game and if breastmilk was the only source of nutrition for her baby, then she should have thought twice about being in the game in the first place.

Omarosa thinks Brandi is evil for giving Keisha a hard time about wanting to go home to breastfeed her daughter. Metta is upset that when Keisha wants to go they send her, but when he wanted to go home they wouldn’t end them.

Meanwhile, Shannon thinks everything is ok with her alliance.Time for the HoH competition, outside in the backyard the set looks like the inside of a ship and it is a round of golf. The person who gets three holes in one, in a row, wins HoH. So far Shannon is in the lead and someone has to knock her off the winner’s circle. Ariadna pulls of the greatest golf upset and takes the lead from Shannon. Mark’s strategy is to not win, he just wants to coast and not have the spotlight on him.

Surprise, surprise – James is killing it, but will he be able to beat Ariadna, no, he missed it by one second. Ariadna is the new HoH. Shannon thinks Ariadna is the perfect person to win as she thinks she is safe with this win.

Last week the house was trying to get Omarosa out of the house, this week she is partying with the new HoH – this game is crazy! Brandi suggests to Omarosa and Ariadna that they put James up and backdoor Shannon so she has less a chance of winning the Veto and taking herself off the block.

Shannon goes into the HoH, Metta is in the room and he won’t leave because he knows that Shannon won’t speak to Ariadna if he is in the room. Shannon gets fed up and eventually leaves, she tells James that Metta wouldn’t leave the room and she thinks its a setup and the house has turned on her.

Shannon is a huge Big Brother fan and she knows what it means when people don’t look you in the eye. Shannon goes to her room, James follows and she tells him she is done and ready to go home; she starts to cry and says she is really lonely and frustrated. James needs her to focus and reminds her that there is still a game to play that she is really good at.

Everyone sits at the table and tells everyone that nobody gives her a chance and she was staying true to their alliance. Omarosa asks Shannon if she was campaigning against her while she was in the hospital, Shannon says no. Time for the nomination ceremony.

The first houseguest nominated for eviction is James and the second is Shannon. Ariadna tells the two she nominated them because they are the biggest competitors in the house.