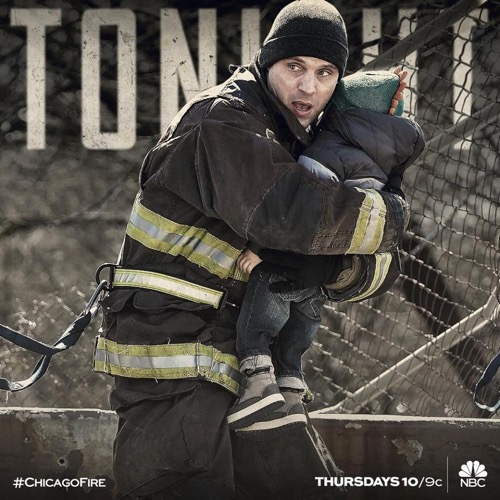 Tonight on NBC Chicago Fire returns with an all new Thursday, April 19, 2018, season 6 episode 19 called, “Where I Want to Be” and we have your Chicago Fire weekly recap below. On tonight’s Chicago Fire episode as per the NBC synopsis, “After responding to a residential fire at a property belonging to a Mexican drug cartel, Casey is skeptical of Cordova after a hefty amount of money was found missing from the crime scene. Elsewhere, Kidd makes a big decision.”

Tonight’s Chicago Fire season 6 episode 19 looks like it is going to be great and you won’t want to miss it.   While you’re waiting for our recap make sure to check out all our Chicago Fire recaps, news, spoilers & more, right here!

Otis is really pushing himself hard in physiotherapy. Chief Wallace is talking to Otis who said he is frustrated and just want to progress with his therapy. There is a call, the team heads out to a fire, some heavy equipment overheated and it’s an active crime scene. Inside, there are drugs and money.

There are some people trapped inside, Stella is calling Cordova for help and he is nowhere around. All of a sudden Cordova appears outside, Captain Matthew sees him and asks where he was, he says he thought he saw something. Captain tells him to get in there with Kelly and the rest of the team and help out. Stella is still trying to break down a door when help finally arrives. A woman is rescued and she is on the way to the hospital. Back at the station after the fire, Chief commends Captain on a job well done.

Chief asks Captain how Cordova is doing, he says ok. Otis watching the news about the fire and Herman says the problem with the drug dealers is they put all their money in one place, they need to diversify. Otis makes a joke that they need Herman to manage their money. Herman says someone needs to teach them the value of money.

Sylvie asks Stella how life is with Kelly, she says great and then mentions something his mother said, that he can be fickle about relationships. Sylvie lets slip that Kelly has come a long way since his wedding in Vegas days, Stella wants an explanation but they get a call and have to go. Sylvie and Gabriella arrive on the scene, it is gang hit, five victims killed execution style and on the back of the trunk of a car, it is written LADRON, meaning thief.

At the station, Antonio is there and says there has been a lot of activity from the cartel since the fire and $100,000.00 is missing and they are going to search until they find it, they are in for a bloody month. Kelly and Stella are alone, she asks him if he was ever married before. Kelly asks her who told her, she doesn’t tell. Kelly tells her that it was a crazy time, they had both just lost people they love. Stella says that it would have been good to have heard about and asks if there are any other secrets that he is not telling her, he says no, he was just young when this happened.

Marlena tells Gabriella that someone tried to kill her, there was a lot of smoke, he was holding something, he was big, over six feet tall with a heavy coat – when he noticed her he pushed her into the cage and shut it, she thought she was dead.

Antonio is with Captain, asks him questions about the day of the fire and it leads to Cordova, Captain tells him that Cordova disappeared for a while. Antonio looks like he knows something, Captain asks him to tell him if it involves his unit. Otis is at the bar, he tells Sylvie that HQ said that he is training and pushing himself too hard. Sylvie tells him to slow down and don’t risk his entire career. Captain speaks to Cordova, tells him about the missing money and he was the only person in the room. Cordova is mad and starts raising his voice and tells Captain he is doing this because he wants him gone and away from his wife. Captain tells him to calm down.

At home, Gabriella tells Captain that he was asking Cordova the wrong questions, he accuses her about not looking at this objectively because she has had a past relationship with Cordova. Herman’s wife comes to the station and tells him that she wants to talk about Lee Henry, he was watching pornography in his apartment. Stella is doing the equipment check, Captain come in and speaks to her – she asks him if he knew that Kelly was married, he told her not to worry about it. Stella tells him that she just feels that Kelly always holds back from her, he tells her he deals with things like her and he just tries to be patient.

Chief and Captain call Cordova into his office,k Captain apologizes for coming at him the other night. Chief tells Cordova that this is off the record. Cordova reveals that he noticed someone in the fire, he went after him but he couldn’t get to him, there was too much smoke, he was a tall guy. He says he should have followed orders, but he wanted to hustle to prove he deserved to stick around and that is all he is guilty of. Cordova goes to talk to Gabriella and asks her to stand by him and tell everyone who he is, she refuses. There is a call, it’s an auto accident and baby stroller is hanging off the edge of a bridge – it was a drive-by shooting. Captain rescues the baby while Herman and Cordova assist.

Back at the station, Otis has a chat with Cordova who tells him he has been floating for two years and he likes it here. Cordova tells Otis he is rooting for him on this next assessment. Otis goes in to see Captain and tells him that Cordova is a good guy and doesn’t want to hold everyone back, if he doesn’t get his clearance he is going to step back. Captain then speaks to Kelly and asks for his help with a file. Herman takes the apartment away from his son, says he might make it into a rental. Kelly asks Herman how serious he is about renting it, she might rent it from him and move out away from Kelly, Herman tells her it is hers if she wants it.

Meanwhile, Kelly has found something, there is unaccounted space in the home where the fire was and it may be enough for someone to hide. Captain is with Chief and Cordova and they go over his steps, he brings them to a room where he followed the ghost – they find a trap door and there is a guy inside on the floor. They found the missing cash on the guy’s body. Antonio is there, he is going to put the word out that the money was found and hopefully the violence will stop. Captain apologizes to Cordova for not believing him, he says he is going to put a call into HQ, the moment they have a seat open, he is their guy.

At the station, Stella tells Kelly that she asked Herman if she can move into his apartment. Kelly is surprised, she says that she is concerned because he was only married for a month. At home, Gabriella looks mad at Captain when Cordova arrives at the door – he tells Captain that he will have to pass on joining 51, he doesn’t want to cause trouble and wants to move on. Captain says he has to do what he thinks is right and will put in a good word for him no matter where he goes. Cordova tells him he is a lucky man, Captain says he knows that Gabriella hears it and she is touched.

Otis is at the hospital, he is getting tons of messages on his phone from the team giving him support, it makes him happy. Stella is moving in to Herman’s apartment, Kelly arrives at the door and is surprised that she is really doing it. She tells him that it doesn’t change how she feels about him. Kelly tells her he doesn’t care where she lives, wherever she is, it is where he wants to be.