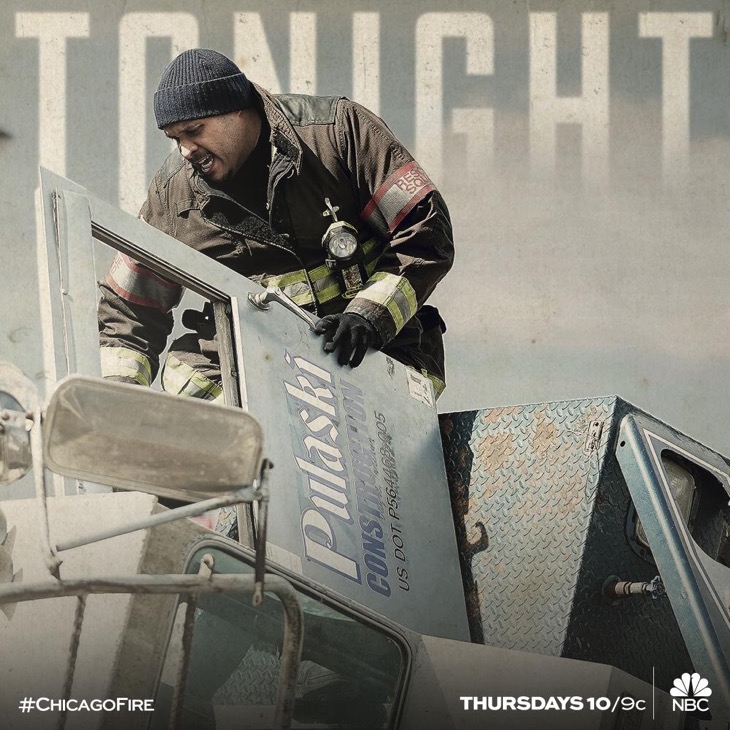 Tonight on NBC Chicago Fire returns with an all new Thursday, April 26, 2018, season 6 episode 20 called, “The Strongest Among Us” and we have your Chicago Fire weekly recap below. On tonight’s Chicago Fire episode as per the NBC synopsis, “After saving a girl from a car accident, Chief Boden and Lt. Severide are taken aback when they receive a surprise package. Brett struggles to keep quiet about Cruz reacquainting with his now married high-school sweetheart and Otis tackles his next challenge. A crisis brings Bria back into Dawson’s life.”

Tonight’s Chicago Fire season 6 episode 20 looks like it is going to be great and you won’t want to miss it.   While you’re waiting for our recap make sure to check out all our Chicago Fire recaps, news, spoilers & more, right here!

Otis is at the doctor’s office and he gives him the news that he is clear to return to active duty. Before the morning’s briefing, Chief Wallace welcomes back Otis. Captain Casey has a few words, he recognizes Otis’ cane and everyone claps.

Chief Grissom drops by and tells Chief Wallace that he can no longer get a promotion and take his job when he returns because he realized he has still got more to give and is putting his retirement on hold. The alarm goes, the crew is called to an accident. A cement truck ran over a woman, Chief Wallace is trying to save her with Kelly – the ambulance arrives just in time and they save her.

Back at the station, Herrmann announces that the food bill has definitely gone down since they got rid of Cardova. Stella announces that she wants to keep driving the truck, she stepped up when Otis was gone and she wants to keep on doing it. Captain Casey thinks they should do some spring training and see who is the best driver for 81, Stella is happy, Otis is not.

Gabby gets a message from Bria who sounds very upset, Casey tells her to calm down and take a deep breath. Connie finds a box of old photos and gives it to Chief Wallace, he goes through it. Gabby tries to reach Bria and there is still no answer.

Mr. Jamison arrives at the station and tells Gabby that he needs her help. It turns out that Brie does need Gabby’s help, she tells Casey it is girl’s stuff. Otis is teasing Stella, he suggests that service on the truck has gone down since he has been gone. Mr. Mantra drops by the station, he is the father of the girl who got hit by the cement truck – he just wanted to drop by and say thank you to Chief Wallace.

There is a call, it is a personal injury. Gabby and Sylvie are on the scene, it is a barber shop, the barber slipped and cut of the man’s ear. They bandage him up while they get the amputated ear on ice. At the station, Chief Wallace asks Kelly if he will do him a favor and run an errand with him. Gabby and Casey head to Brie’s apartment; her prom is in four days and she needs help.

Casey stays in the kitchen and talks to her dad, he is clean and back to work, Casey is happy for him. Wallace and Kelly are at a boating sale, he tells him that he is not getting his promotion but he will get the boat that he wants.

Joe is meeting a married Facebook friend at a restaurant. She is really touchy with him and tells him right from the start that he is married, but she has thought about him over and over again, she can’t get it over it. She says life is too short and she doesn’t to just think about their time together anymore. Wallace gets an envelope dropped by him, it is full of money, Kelly received one too – the money doesn’t include a note. Wallace calls the money in right away, he wants to do the this the legal way.

Joe goes to talk to Sylvie for advice, he tells her that there is this girl he went to high school with, she is married and they are already talking divorce; they met for a meal and she says that she is getting a hotel and wants to meet him there. Sylvie says no way, this woman does not deserve him. Wallace and Kelly are at the Commissioner’s office, Grissom was called in with them. It turns out that it was the victim’s father who sent the money, he wanted to thank them for saving his daughter. Captain Casey made his decision on who will drive the truck.

Stella asks for a few minutes and goes to talk to Otis in private and she comes up with a plan. Stacey then tells Casey she is dropping out, Casey congratulates Otis. Bria is ready for prom, Gabby is there and truck 81 shows up to take Bria and her boyfriend to the prom. Stella is driving and she puts the siren on, Casey and Gabby look happy – she tells him she wants to start trying again.