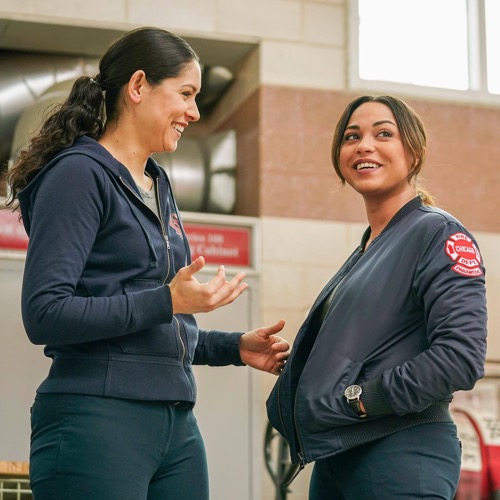 Tonight on NBC Chicago Fire returns with an all new Thursday, May 3, 2018, season 6 episode 21 called, “The Unrivaled Standard” and we have your Chicago Fire weekly recap below. On tonight’s Chicago Fire episode as per the NBC synopsis, “Lt. Severide is shocked when Rene Royce resurfaces at the firehouse. Casey comes up with a plan to help Chief Boden in his latest pursuit. Kidd regrets a decision she made regarding Severide. Herrmann doesn’t see eye to eye with Lt. Colannino over coaching their son’s basketball team.”

Tonight’s Chicago Fire season 6 episode 20 looks like it is going to be great and you won’t want to miss it.   While you’re waiting for our recap make sure to check out all our Chicago Fire recaps, news, spoilers & more, right here!

At a boys basketball game, Chris has to yell at the parents when they get out of control. Back at the station, Kelly asks Stella out on a date after he tells her he misses her. They get a call.

On the scene, the ambulance door gets stuck. The EMT inside is injured while the patient lay on the gurney shaking. He loses consciousness. The team opens the doors with bolt cutters and get inside to help.

Delia, an old school friend of Cruz’s, stops by the station to see him. She talks to Sylvie, handing over Cruz’s ID and money clip. He dropped it on the floor.

Cruz runs into Sylvie who is giving him the cold shoulder. He asks her what is wrong. She tells him Delia stopped by. He lied to her. She cannot believe he is spending time with Delia, she is married.

The captain tries to do damage control with some of the team who has heard that will get new management with low funding.

Kelly’s old girlfriend shows up at the firehouse. Stella is worried. The ex-asks Kelly to help her with a case she is working on.

The commissioner shows up. The crew starts cleaning quickly. He tells them to relax. He just wants them to know that he is going to work for FEMA.

Chris’ wife stops by. She thinks he needs to talk to one of the loud parents at basketball who is upsetting the other parents. He reluctantly agrees.

The guys talk. They think Boden would be a good commissioner. They talk to everyone they know to campaign for him.

Cruz tries to talk to Sylvie. She tells him she had no right to say anything. It is his life. He can do what he wants. He isn’t sure what to do with that.

Kelly assures Stella that his ex just came by about her case. She tells him she is fine. She just wants to spend more time with him.

Chris runs into the parent who keeps yelling at the game. He tells Paul he needs to tone it down. Paul agrees.

Cruz meets with Delia for dinner. He tells her they need to put the brakes on this. She tries to seduce him. He tells her he has to go. On his way out, her husband approaches him and punches him in the face.

Cruz goes back to the firehouse and puts ice on his face. He talks to Sylvie, asking her not to give up on him as stupid as he is being.

Boden talks to the guys, he is upset that they have been campaigning behind his back. They apologize but they think he is a great leader that the city could use.

Kelly’s app shows up at the station with her kid and a box of files. Kelly shows her son the fire truck as Stella watches from a distance, nervous.  A call comes in soon of the team head out. They head into a garage that is going up in flames. The chief tells them to evacuate immediately. Chris used a mechanic to come to underneath one of the Lifes. The chief commands him to keep moving. Chris drags the mechanic whose sneaker gets caught. He gets out safe but Paul is not behind him. They look around and realize he still in the building.

The building explodes just as Chris tries to run back in.  They break out the hoses putting out the flames. The chief tells them to run back in to find Paul. They find him with his whistle going off. He is unconscious and not breathing. His pupils are blown. Chris tries to resuscitate him. He dies.

Back at the station, Chris is taking it hard blaming himself. Mouch consoles him. Boden decides he is going to run.