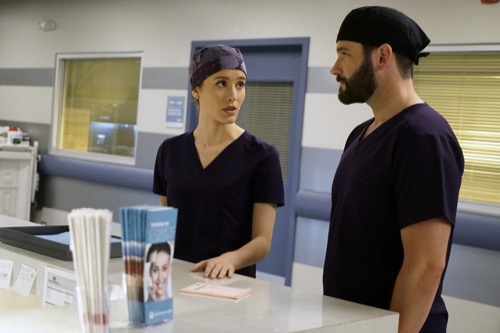 Tonight on NBC their medical drama Chicago Med airs with an all-new Tuesday, October 03, 2018, episode and we have your Chicago Med recap below. On tonight’s Chicago Med season 4 episode 2 called, “When to Let Go,” as per the NBC synopsis,“Part 2 of 3. The doctors and nurses of Chicago Med find themselves on high alert when an overflow of patients are rushed into the doors following a terrifying apartment complex blaze. Dr. Rhodes fights to save the life of one of “Chicago Fire’s” own, while Dr. Halstead and his brother Jay struggle with their own personal battle.”

There was a huge fire and one firefighter in particular was injured on tonight’s all new episode of “Chicago Med”.

The hospital was at full capacity. There were firemen everywhere that were waiting around for information for one of their own, but there were also other victims of the fire. They were being brought in all at once and the nurses tried to keep on top of things even if they sometimes failed. One of the many patients was Pop Halstead. His sons had wanted to make sure that he was receiving the very best of care after he survived the fire and unfortunately he resented it. He said he wouldn’t have been in the building if they hadn’t sold his house and he accused both of his sons of taking his money. Dr. Halstead had tried to ignore the remarks and so the first one to snap was his brother the detective.

Jay had reminded his father that he never had any money and that the reason they made him sell the house was because he couldn’t take care of it on his own. Jay had gotten so angry at his father that he stormed out and Dr. Halstead had to follow him. The brothers began talking and it seems that Jay had finally lost his patience with their father. He said he was tired of being the only one to check up on him and being the one blamed as the bad guy. Jay had also asked his brother why he hadn’t defended him and Jay didn’t like the answer he got. Dr. Halstead said that it was better not to argue with their dad because it didn’t change anything and he tried to speak up for himself when he said he also looked after their father by making sure the older man took his meds.

Either way, Jay still hated being the one that blamed for everything and so he said it was his brother’s responsibility to find their father his next apartment and then he left. Jay had hated being around their father when the man was being so ornery and so Dr. Halstead was suddenly and solely in charge of his dad. He normally would have talked about things with his fiancée though Dr. Manning had had her hands full. She saw a young woman named Blair Scott and sadly the teenager was in a bad shape. She had burnt over ninety percent of her body and was still unconscious when her parents arrived. Mr. and Mrs. Scott had heard about how their daughter would need to stay at the hospital for months on end for skin grafts and that she would need cognitive as well as physical therapy.

The parents had heard how it would be an uphill battle for their child and they thought their best option would be to stop treatment. The parents said that their daughter had struggled first with body issues and that it had caused some horrible bullying but that had only changed after she lost weight and changed schools. Blair was just starting to enjoy her life when this fire happened and her parents knew that she would go back to being unhappy if she somehow managed to survive her injuries, so they told the doctors that they wanted to stop treatment. They wanted to remember their daughter as she was these past few months rather than her end up hating herself again and that decision had affected the doctors treating Blair because Manning hadn’t wanted to give up.

The doctor had wanted to try and save the teenager with everything she had in her except it wasn’t her decision to make. She had to learn to let go of her patient and she wasn’t the only doctor that had to do so. The rest of the hospital was also struggling. Dr. Choi had been on the injured firefighter and he agreed with Dr. Rhodes on the best form of treatment. They both believed that the only way to save Stella’s life was to remove her lung and if that happened she couldn’t go back to being a firefighter. Her friend Severide had been outside of her room and he hadn’t wanted them to take her lung. He had argued against it because he said that it would be taking away what she cared about the most. And Severide had gotten so upset that security had to be called.

April hadn’t approved of that decision. She thought that Severide had every right to defend his friend and so she found a way to get him back into the hospital. Severide and his whole station had been told that only Stella’s family could make a decision about her health and well they are her family. They all cared about Stella and none of them wanted her to lose out on her career because of this fire. They had spoke with Dr. Rhodes and in doing so they managed to convince him. He went into surgery with the hope of saving both of Stella’s lungs and that made the surgery that much harder. There had been countless times when Rhodes could have given up and he refused to do that. He kept going despite what other doctors were telling him and eventually Dr. Choi couldn’t stand to watch what was happening.

Choi questioned why April spoke up. She could have done it because she cared about what happened to the patient or did she do it because it involved Severide? Choi had asked April that and she hadn’t been able to answer because all she could say was that it was true that she’s known Severide since they were kids. Choi had thought that was an answer and he left to deal with his other patients. He was treating a young woman that came in badly burnt as a Jane Doe and she had been doing good until he left her alone for a while. He came back to see that she was in distress and the doctor that had arrived before him had demanded to take over. He thought that Choi had messed up somehow and so he was treating her but what they soon noticed was that the reason her health took a turn for the worse was that her other injuries.

Jane Doe had been badly beaten and it had caused her fluids to build in her arm. Whoever she was – someone had beaten her so badly that it could likely kill her and so if she hadn’t been found because of the fire then odds are she would have died from her injuries. The doctors began to treat Jane as they would any other domestic abuse victim and they also asked the nurse to see if she could track down a name. All they had was that the victim was a young Latina and that she lived in the apartment building that burned down. There was nothing else they had to go on and with the hospital being so full there must have been someone that knew her. People were looking into Jane Doe and as that was happening there was one doctor with good news. Dr. Rhodes had gotten very lucky and had managed to save Stella’s lungs. She still had the two of them and she could still be a firefighter.

Even Dr. Manning had gotten some good news as well. She had been in the room after the parents had agreed to take their daughter off the ventilator and as it happens the young girl hadn’t slipped away. She instead kept breathing on her own and so her parents changed their minds. They said if their daughter wanted to live then she deserved that chance and so they agreed for her to receive treatment. Dr. Manning had thought that was a miracle and she only felt bad when she realized that Halstead had been denied that chance. His father’s health had taken a turn for the worse and he had been left brain dead after being under for too long. So Dr. Halstead knew he had to be the one to let go of their father because his brother Jay couldn’t. Jay regretted the argument he had with their dad and he wanted to keep him on the vent. He wanted it so bad that he refused to listen to his brother when the doctor explained how the hospital only wanted to keep their dad on the vent because his bypass surgery was less than a month

If he died within that month then the hospital had to count him as one of their fatalities. Dr. Halstead told his brother this and Jay hadn’t cared. He just wanted to hold on for a little while longer and so it wasn’t until Dr. Halstead finally agreed to let his brother grieve that Jay felt it was time. They both wanted to take their father off his ventilator and while Dr. Halstead wanted to stay around the hospital – Jay had wanted to join the police in finding out what happened with the fire.

The one person everyone believed might have answers was Jane Doe. Jane had woken up, cut out a GPS tracking chip that she had in her, and had fled the hospital before anyone noticed.