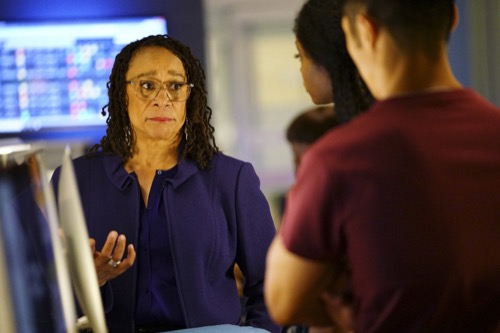 Tonight on NBC their medical drama Chicago Med airs with an all-new Wednesday, October 10, 2018, episode and we have your Chicago Med recap below. On tonight’s Chicago Med season 4 episode 3 called, “Heavy Is the Head,” as per the NBC synopsis,“When a sick boy is brought in, Ethan is faced with a tough decision that quickly escalates into a complicated and dangerous situation. Connor and Maggie are put to the test, while Natalie and Ethan aren’t sure what to make of Elsa, the new third-year medical student.”

Dr. Halstead had a wake for his father on tonight’s all new episode of “Chicago Med”. The late Patrick Halstead was a complicated man. He had family and he had friends however he often made enemies out of people that were supposed to be the closest to him. His sons had argued with nonstop and had always felt like they came up short with their father. Neither of them had thought their father liked them much and so it had come as a surprise to Jay Halstead when he found pictures mixed in with his father’s things. Patrick was capable of pushing his sons away and at the same time he was keeping mementos in a drawer where no one else could see. There were pictures of Jay’s graduation from the academy and there was even some clippings from new articles that detailed Jay’s cases. And so Patrick had loved his sons in his way.

Jay at least had those photos to hold onto, but Dr. Halstead had been at a loss and the only thing that helped was taking his mind off his troubles. He had run into someone at the wake that said their father wasn’t feeling too well and the doctor said that he’ll take a look. Dr. Halstead hadn’t returned to the hospital while his fiancée Dr. Manning chose to pick up where she left off. She went back to the hospital and had agreed to let a training doctor shadow her. The trainee was Dr. Curry and she was very good at what she did. She was considerate of a pregnant woman whom they met and she had made sure that this woman was comfortable. Only Dr. Curry had heard Lisa explain how her pregnancy was a miracle and how she couldn’t wait to have it because it was a gift from god and Dr. Curry hadn’t known how to break the news.

Lisa’s uterus was bent in an unusual shape and that’s why she hadn’t been able to get pregnant for several years. With her being pregnant now, that had been a fluke and unfortunately it was going to be a very short one because the pregnancy was ectopic. The fetus had been placed outside of the uterus and it was actually putting strain on Lisa’s heart. She needed to have an abortion for her own health and Dr. Curry hadn’t wanted to be honest with this woman from the very moment she suspected that Lisa’s pregnancy was ectopic. It was Dr. Manning that stopped her. The more experienced doctor said that they should wait until they could prove it without a doubt and after that she thought Lisa would just go along with their recommendation. And Lisa shocked them when she said she wasn’t going to end her pregnancy.

Lisa has waited for a baby for most of her married life and so she didn’t want to end her miracle. She heard the doctors when they said she would die if she chose to stay pregnant and she hadn’t cared. Lisa said God would protect her and so her doctors were left without an option. Dr. Curry had wanted to fight this decision and had even called in Dr. Charles. The therapist was supposed to reason with Lisa and he refused to do that because he said he couldn’t trample over her religious beliefs. If she wanted to refuse care then it was her right to do so! Dr. Charles also ended up in an argument with Dr. Curry because she called God and everything attached a fallacy. She wanted them to prioritize the science and make this woman get an abortion that she doesn’t want. And so she was left disappointed when everyone sided with the mother.

Often the parent knows best though elsewhere the doctors were struggling with a parent that was the problem. A father came in with a sick son. The boy’s name was Ben and he had been born with bad kidneys. He was in treatment for this condition and was pulled out of such treatment when his father chose to kidnap him. It was a custodial kidnapping Chris Davis really was Ben’s father and so the problem was Chris didn’t have access to his son. He had gone to prison and, by time he had come out, his ex hadn’t wanted him anywhere near their son. The father disagreed and so that’s when he kidnapped Ben. Ben had been going through dialysis and his treatment wasn’t something he could miss, so he was soon showing signs of kidney failure. The doctors at the hospital had tested Ben and he was in fact in the end stage of kidney failure. And so what he needed was a transplant.

Maggie had come around to check on Ben and she recognized his father when she saw him at his son’s bedside. She knew that this man was wanted for custodial kidnapping and she told Dr. Choi that they needed to call the cops. He agreed and the cops came for Chris, but Dr. Choi noticed that the man was a good father and that he wanted to be there for his son. So Dr. Choi arranged for Chris to be under arrest and still by his son. If he had been moved then Dr. Choi would never have gotten his later idea. He figured the father might be a match for Ben and had Chris tested. It turns out Chris could donate his kidney to his son and so Dr. Choi was ready for the surgery. He had even prepped Ben and was about to move both father and son upstairs when he was stopped. The hospital’s new boss had said that they couldn’t take the risk.

Chris would have surgery and then be given a few days to recuperate before he was sent back to jail. This new boss said that wasn’t enough time for him to recover and that the hospital couldn’t afford for him to die so close following surgery. It was cold and calculating decision yet Goodwin and Dr. Choi both had their hands tied. They couldn’t do surgery on Chris and so he was going to be sent back to prison. He was about to be escorted out when he grabbed a gun and then threatened the police officer. Chris begged them to do the surgery and he eventually took things into his own hands when the doctors still refused him. He ended up shooting himself and the matter stopped being about his recovery – it was just all about Ben. Ben could have his surgery now that the hospital didn’t have to worry about Chris’s recovery and so his father saved his life in the end.

As for Dr. Curry, she might have found a way to manipulate things. She got Lisa to agree that if the baby died that they could perform surgery and so later she was on the one that performed an ultrasound. She couldn’t find a heartbeat and nothing registered on the machine. Dr. Curry and Dr. Manning asked Lisa if they could perform surgery seeing as the baby had died and she agreed. She had the surgery and Dr. Manning saw for herself that the fetus still had a heartbeat. She had apologized to Lisa and her husband afterwards because she thought the machine had had a glitch however Dr. Charles suspected something else. He thought that Dr. Curry hacked the machine to get the results she wanted and while he couldn’t prove it he could at least watch over Dr. Curry’s cases. He said that he would be reviewing everything to see if she toed the line.

The hospital had been in one turmoil or another and Dr. Halstead thought he missed it all. The favor he performed for someone else’s dad had paid off. He now had a banquet hall for his upcoming wedding and had gotten it at a cheap price. Dr. Halstead thought that would be it except Ray Burke was basically demanding that the doctor continue to treat him off the books. The doctor hadn’t been too sure about that and he was only going ahead with it because he hadn’t wanted to lose the wedding venue though getting involved with a gangster had consequences. His brother Jay had found him and told him that he was now on Chicago PD’s radar. The police wanted to know why Dr. Halstead was getting involved with a crook.

Dr. Halstead’s agreement to a favor came with consequences on tonight’s all new episode