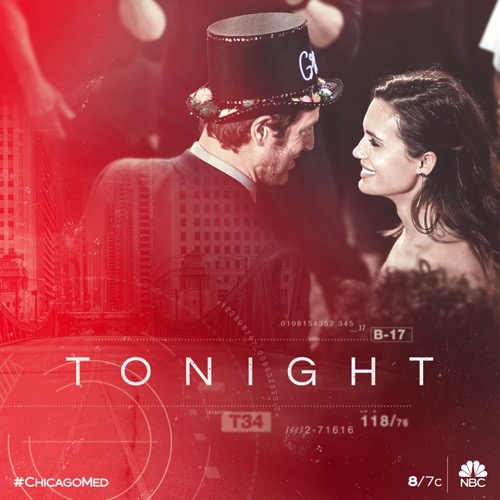 Tonight on NBC their medical drama Chicago Med airs with an all-new Wednesday, October 31, 2018, episode and we have your Chicago Med recap below. On tonight’s Chicago Med season 4 episode 6 called, “Lesser of Two Evils,” as per the NBC synopsis,“Dr. Manning and Dr. Halstead become skeptical of a patient’s injuries when the victim of a car accident is brought into the hospital. Ethan and April have a difficult time understanding Emily’s attachment to her boyfriend despite recent developments. Will and Natalie brace for their joint bachelor-bachelorette party.”

Dr. Halstead saw something wrong with Ray’s EKG on tonight’s all new episode of “Chicago Med”. He was treating Ray as part of an investigation and so Halstead asked his brother if he should tell Ray about his results. Halstead was a doctor first and he wanted to be able to treat his patient like he should however his brother told him to back off. Jay said Ray was a criminal and that Halstead wasn’t his real doctor.

He was just a tool that the police and the FBI were using, so he told Halstead to back down and wait for further instructions. Jay also reminded his brother that if he wanted to worry about something then he could worry about his bachelor party. Halstead had agreed to do a joint bachelor/ bachelorette party with his fiancée Dr. Manning and that was the only thing Jay wanted to discuss.

Only Halstead didn’t have time to think about his party. He and Manning were up when a young couple came in following a car accident. The wife was Daria. She was from the Ukraine and her English was a little broken, but her husband Adam refused to leave her side and Halstead thought it was sweet while Manning found it worrying. She had seen the bruises on Daria and some of it were older than the car accident.

It looked she had been kicked by someone’s boot and so the doctors eventually got Daria alone. Manning talked to Daria about her injuries and she found out why Daria couldn’t press charges. The young woman had to leave the Ukraine or risked death and she came to the states on a fiancée visa because Adam had seemed like sweet in the beginning. Daria also said that everything changed when she came over.

Daria and Adam got married though he started to become abusive not long after that and he left Daria with no way of getting out. She didn’t have a green card because Adam said she was a bad wife and he threatened to have her deported if she ever left him. He knew that Daria couldn’t return to the Ukraine and so Daria told Manning to ignore the bruises.

She didn’t have any place to go or even money and she felt she had to stay with Adam until she could get her green card. Daria had pleaded with Manning to walk away from the situation and Manning didn’t know how to. She went to Sharon to see if they could talk to immigration lawyers and she found out there was a way for Daria to seek a green card for herself. If approved, she could possibly gain a work visa and wont have to rely on her abusive husband.

Daria heard about it and it sounded like a godsend yet her husband had come into her room following this sign and he suspected something. Adam noticed how cold Halstead was treating and how Manning kept demanding that his wife needs to be monitored at the hospital. So he realized that they knew. Adam then demanded that they discharge his wife because he said that he could watch over Daria at home and Daria was so scared of him that she didn’t fight the decision. She told the doctors that she wanted to go home and the doctors knew that if she left with him that they wouldn’t be able to help her. They also knew that the next time Adam began beating on her could be what kills her. And so they were trying to figure out how to get their patient to understand she was safe.

Meanwhile Dr. Choi came upon an unusual problem. He was treating a teenager that came in showing signs of Wilson’s Disease and what that meant for Gabby Phillips was that she was going to need a new liver. She could wait years for a new liver off the registry or she could get a living donor.  Her mother couldn’t get tested because of a condition and so it was just her father.

Her father wasn’t a match and his blood type showed he couldn’t be Gabby’s biological mother. Dr. Choi called in Dr. Charles because he wanted to speak about the matter with Gabby’s mother Jeannette and Jeanette revealed that she hadn’t cheated on her husband or anything like that because Gabby was adopted. She said that Gabby was a ward of the state and that there were no living family members that could have taken her in, which is how they came to adopt her.

It seemed plausible only Charles felt the parents were holding back. He kept trying to talk to Jeanette again and neither she nor her husband were willing to discuss the adoption, so Charles recommended that they pull up Gabby’s adoption from the state. They could do so in case of emergency and Charles felt strongly that this situation was an emergency. He just didn’t know how bad it was until they couldn’t find any record of Gabby’s adoption.

Both Dr. Charles and Dr. Choi pulled the parents aside to tell them that they couldn’t find a record and they demanded the truth. The truth as it turns out was that Gaby wasn’t adopted. She had been kidnapped as a baby by the people she believed were her parents. The Phillips stayed in the same apartment building as Gabby and her mother and the mother was so busy getting high that she left her baby outside in a ratty bassinette.

The parents thought they were justified to take Gabby and they weren’t. The doctors called the cops and the police notified Gabby’s real mother. The woman had gotten herself clean and had a steady job for the past six years. Alyssa was so happy to find out that her daughter was still alive and she went to see Gabby, but Gabby refused to have her in the room because she said Alyssa wasn’t her real mother.

It was going to be a long road for Gabby and her mother was understanding. She even wanted to thank Gabby’s kidnappers because they saved her daughter’s life. She knew that something could have happened to her daughter if she had been able to keep her and so she knew that Gabby’s “other” parents were good people who did a wrong thing. And so watching this play out had taught Dr. Choi that he should be supportive of his sister no matter what.

Emily was going to be moving with Bernie to Las Vegas as soon as he’s discharged and Dr. Choi was pretending to be ok with that.

Also, Dr. Manning and Dr. Halstead found a way to protect their patient. They staged Daria’s death and told her husband that they had to get an autopsy done. They said it was a rule because of the circumstances in which she died and the fact that there were injuries on her that weren’t from the car accident. They made Adam knew that she could have died from whatever those injuries came from and so the man found a way to sneak out of the hospital when no one was looking.

Adam fled to save himself although what it really did was allowed Daria to see a lawyer and get her green card without him knowing. She was now safe and the doctors had gotten into trouble because of what they did to protect her. Luckily, they still had their jobs and they went to their party where they enjoyed himself.

When he had the first chance to, Halstead pulled aside his brother and told him that he was going to inform Ray about his condition.

So Jay told him that if he did that, he was going to be in trouble with Intelligence.