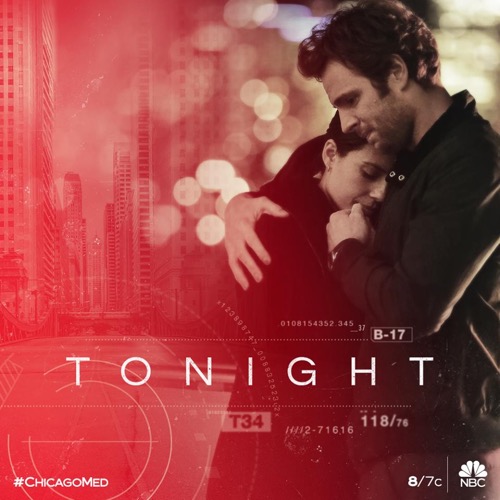 Tonight on NBC their medical drama Chicago Med airs with an all-new Wednesday, November 14, 2018, episode and we have your Chicago Med recap below. On tonight’s Chicago Med season 4 episode 8 called, “Play By My Rules,” as per the NBC synopsis, “Dr. Charles struggles to convince Dr. Choi that surgery isn’t always the answer. Dr. Rhodes finds himself in hot water with Goodwin when he disobeys her direct order.

April becomes frustrated with Maggie when she continues to question her leadership role as the stand-in charge nurse. Dr. Manning suspects Dr. Halstead is keeping something from her.”

Ray Burke told Dr. Halstead that he wanted nothing to do with him after the MRI fiasco, but the doctor couldn’t leave a patient without care on tonight’s all-new episode of “Chicago Med”.

The doctor saw something on the MRI results. He saw what could potentially lead to a stroke and so he wanted to warn Ray however his handler told him to back down. The feds were upset that they lost their chance at catching Ray in a crime and so they didn’t want to jeopardize any future operations by allowing Ray to get treated. It would have delayed their plans and therefore they told Dr. Halstead to truly back away from this one. He shouldn’t call or try to reach out to Ray to warn him that he was a health risk because no one wanted Ray to take a day off a work. If he was still out on the streets that meant they would catch Ray eventually committing a crime and so Halstead was given his final warning. He was told to back away from the situation or risked getting arrested.

Only Dr. Halstead was struggling. He couldn’t reconcile being a doctor and an informant at the same time. Halstead tried to be a doctor and that worked against him yet to be anything else would be just as bad and so the doctor was trying to figure out what to do when another patient came in with a dilemma. The patient Jones and he came in after getting into a hit and run accident with his daughter. The daughter was two-years-old and her mother passed away from cancer. Her father was all that she had left and he had a gigantic tattoo on his chest that said: “Do Not Resuscitate”. He probably got it after watching his wife being incubated and still dying. And so at one point, he had a very good reason for the tattoo.

The complication, unfortunately, is this – if his tattoo is to be believed then his daughter was going to lose the one person she has left in the world. No one wanted to orphan a toddler and so the doctors went to Goodwin. Goodwin told them to work with the choice of life until they figured out whether the tattoo should be considered a legal request. So Halstead and Dr. Manning treated Jones and his daughter. They were working tirelessly to keep one family together and elsewhere in the hospital, there was a patient who lost everyone in her life. The patient was young a woman whose parents were dead and who couldn’t hold down a relationship or a job because she had an itch on her scalp.

The patient was referred to Dr. Choi and so the doctor tried to find out what was behind this itch. He asked the patient to explain it and she said that her scalp never stopped itching. She had scratched a bloody patch on her scalp and she still wanted to scratch it. Choi could not understand what could have caused it and so he thought it might be psychological. He called in Dr. Charles and that caused the patient to automatically close up. She had seen psychiatrists before and she knew the itch wasn’t a hallucination. What she hadn’t counted on was Charles believing her. Charles prescribed a light anesthetic to go onto the wounded area and for a while, it worked to stop the itch. It eventually wore off before it was supposed to and that time the itching had been much worse.

The patient had been so desperate to stop the itch that she exposed her skull, so the doctors didn’t know how to help her and they chose to do something like hold her down to get her to stop in the meantime. They kept her controlled until they spoke to a neurosurgeon and that doctor wanted to remove all feeling in the scalp to stop this mysterious itch. Which was a good plan though Charles didn’t think it was going to work. He said the anesthetic should have worked for a few hours and it didn’t. The doctor believed that whatever was going on had nothing to do with the patient’s nerve system and it might, in fact, be psychological. Charles tried to explain himself to the fellow doctors because he truly didn’t think they could help her and they outvoted him.

Choi and the neurosurgeon were chiefly concerned that their patient had reached her skull. They thought to cut into her might help and they weren’t going to accept any other solution until Charles could tell them facts rather than what he suspects. So Charles thought about that. He did his research and he believed the patient was suffering from phantom pains. She probably had the pain at one moment in her life and, because she thought it was still there, she kept feeling it. Charles believed that some cognitive therapy could help her and he won over Choi in the end by proving that even a doctor could be confused by phantom pain. Both of them tried to stop the surgery and they hadn’t been able to convince the neurosurgeon. The patient, on the other hand, wanted her life back and she was prepared to try anything.

Charles and Choi put the patient through cognitive therapy. She experimented with scratching one side of her head in front of a mirror and in time she tricked her mind. She imagined herself finally getting to that inch and it controlled it.

Over with Drs. Halstead and Manning, they lost a patient. The little girl died and her organs could possibly be used in saving the lives of children on the donor list, however, they would need her parent’s consent and so Halstead wanted to wait until his patient woke up. His patient had suffered multiple surgeries and was paralyzed from the neck down as well as most likely brain dead. The odds said that he was never going to wake up and so the only one that kept trying to preserve his life was Halstead. Halstead couldn’t back down from wanting to save a patient if he could and so Manning went behind his back. She went to Goodwin and got her to sign off on letting the patient go.

Manning said that Halstead wasn’t acting like himself and he proved her right when he blew up at her when Goodwin told him what happened. Halstead said he was sick and tired of everyone telling him to back off of treating his patients and he lashed out at Manning because it was easier for him to do that than admit he couldn’t save Ray Burke.

Meanwhile, the tension between Dr. Rhodes and Dr. Lanik was exasperated when they worked together during a surgery and so it was only going to get worse from here.