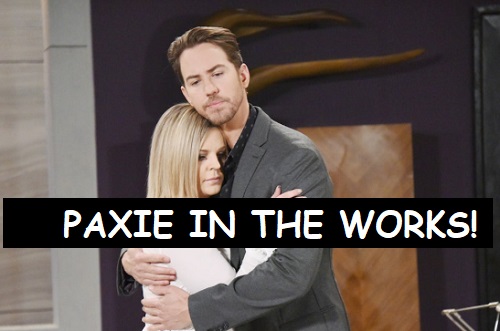 General Hospital (GH) spoilers tease that Nina (Michelle Stafford) will corner Maxie (Kirsten Storms) and demand the truth. Peter (Wes Ramsey) had a serious panic attack when he got trapped in an elevator with Maxie. As heat rushed to his body, he removed his shirt and gasped for air. Maxie managed to calm Peter down, but that led to some awkwardness soon after.

Nina caught Maxie getting off the lift with shirtless Peter, so she’s naturally curious about what went down. She said she didn’t want to know, but that’s clearly not the case. On September 19, Nina will change her tune and seek answers. General Hospital spoilers say Nina will wonder if Maxie’s letting Peter back in her life. In light of Peter’s lack of clothing, she may even suspect a sex session happened.

Maxie will assure Nina that there’s nothing to worry about. She’ll contend that she hasn’t forgotten what Peter did, but Nina may have her doubts. She might argue that Maxie’s falling right back into Peter’s drama. Nina will certainly believe forgiveness is imminent. She won’t like the idea of Maxie getting close to the man who’s already hurt her so much.

GH spoilers say Maxie will once again promise that nothing’s going on. She may admit that she sees genuine remorse from Peter, but she won’t think that means they’ll ever be friends again. Maxie’s wounds run deep, so she may tell herself she can stay strong. Naturally, Nina won’t think so. She knows Maxie better than that! Nina will just want Maxie to be careful with her heart here.

Of course, Maxie can’t help how she feels about Peter. She may not want to admit it, but she was clearly falling for him before his true identity was exposed. Can Peter and Maxie get back to that almost romantic place? They’ll probably do a whole lot better than that!