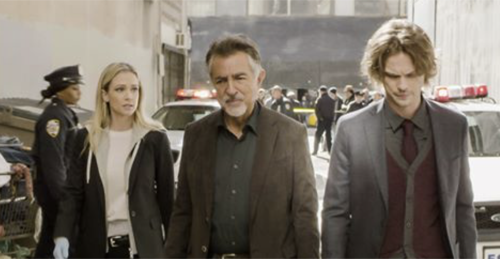 Tonight on CBS their hit drama Criminal Minds returns with an all-new Wednesday, January 17, 2018, episode, called “Full-Tilt Boogie,” and we have your weekly Criminal Minds recap below. On tonight’s Criminal Minds episode season 13 episode 12 as per the CBS synopsis, “The BAU is called to New York when several casualties of a brutal nature are reported in Central Park.”

Alvez was forced to end his blind date on tonight’s all-new episode of “Criminal Minds” when he got called into work about a potential ripper in NYC.

The tea had gotten a call about two murders in Central Park that took place every full moon. The victims were both men and were both “ripped”. Their bodies were disemboweled and their throats were torn. But the victims themselves had nothing in common. The first victim had been a gang member with a violent history and the other had been everyday joe that was simply jogging in the park at night because he was preparing to run a marathon. So the men had nothing in common and hadn’t known each other. They were just picked at random and that was worrisome because that meant the Unsub didn’t care about who his victims were.

But a third victim was found while the team was still on the plane. They had just landed when they were filled in and the third victim was very much like the gang member. He had been in the park up to no good and had actually just robbed an out of town couple there for their anniversary when he was attacked. His throat was torn first and then he was disemboweled, but the Medical Examiner had had some words for the BAU. She told them that that ripped throats came from bite marks and that there was something odd about them. The other various bite marks and scratches on the bodies all came from raccoons and rats while there hadn’t been any DNA on the victims’ throats.

Their throats had all been torn apart by what appeared to be an animal and so why wasn’t there any animal DNA on those wounds? But the answer eventually came in because of a DNA test. The wounds hadn’t been by an animal, it had been made by a human. So the team was trying to figure out why the Unsub was mauling people when Lewis came up with an unprecedented answer. She told them that their Unsub believed he was a werewolf when in reality he was dealing with a psychosis. A psychosis that made him believe he was shapeshifting when he was, in fact, is very calculated.

The team saw evidence of such calculation for themselves when they found a teenager in the park with bloody clothes and hands. The kid had run away from his group home and had been sleeping on a bench in the park when he said he had been given that coat. But he had been so confused about what happened that he had actually admitted to the crime and was in police custody when the Unsub struck again. That time the Unsub had killed a hot dog vendor that had been out there at night trying to make up for some recent loss in revenue and so that proved the kid didn’t do it though he was close enough to the Unsub that the Unsub could have easily killed him as well.

The fact the Unsub didn’t be what puzzled the team. They wanted to know why the Unsub passed over Chad and so they took Chad back through his memories. They asked him to close his eyes and just envision the night he got “his” coat. He said he remembered being lying on the bench when a man suddenly came over to stand near him and, while he never saw the man’s face, he did remember what the man said after he put the coat on him. Chad said the Unsub told him to “keep warm” and that indicated that Chad or at least something about Chad had ignited something in the Unsub.

The Unsub had cared about the kid and hadn’t wanted him to get hurt. But that confused the team because if that was the case then why target innocent people? So they tried to look at things the way the Unsub was seeing them and they recognized the fact that a jogger could have been seen as someone fleeing the scene and that the vendor who had gotten into a fight earlier that day could have been seen as an aggressor yet, with that being the case, the team realized they were looking for a moral enforcer. Someone with the need to protect his park from people he believed was dangerous. And so something must have happened in that park which perhaps involved a child.

The fact Chad had brought out the Unsub’s protective instinct had made them believe that a child was involved in whatever stressor pushed the Unsub into drug use. The drugs were what convincing a man with the split personality that he should give in to his violent side and so the team knew the Unsub was only going to escalate. But what they hadn’t expected was that the Unsub would begin hunting outside of the park. There had been a fourth victim and that time it had been a woman. She had been out for early shopping and she had been killed like all the others with one exception. The female victim had had an engagement ring that the Unsub stole.

The team theorized that maybe the stressor that had pushed the Unsub had been the break up of a marriage or family. But it had taken Garcia some time to narrow that down to one case in the park and by the time she did it had been too late. He had gone back into the park just not for the reason they all expected. So Garcia was able to shine a light on that. She found out that the McCord family had gone ice-skating in the park when a mugger had gotten violent with the wife and the teenage son had tried to attack him but was killed while fighting for the gun and so that explained why Mitchell McCord had gone back into the park to kidnap Chad. He thought Chad was his late son Bryce and that he could protect now.

But it was more than that. Mitchell’s ex-wife had been brought to the park to talk him down and she told him she was sorry for not listening to him when he wanted to talk and for blaming him for their son’s death. Bryce’s death hadn’t been his fault and the fact he had frozen when he did hadn’t made him any less of a man. He had just panicked and their son died because of the mugger that shot him. So talking to Mitchell and finally admitting where it all went wrong had helped Mitchell to see that Chad wasn’t his son. He was another kid and that time it was Mitchell frightening him. And so Mitchell eventually gave himself up without anyone else getting hurt and he got to say goodbye to his wife Adele.