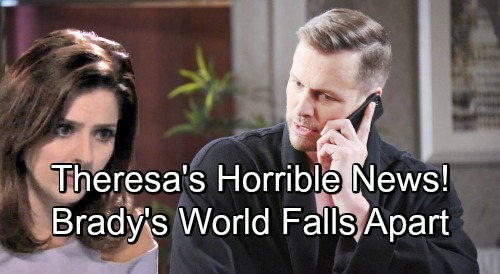 Days of Our Lives (DOOL) spoilers tease that Brady’s (Eric Martsolf) world will fall apart again. He can never seem to stay happy for long! Brady’s already been battling some tough blows lately. The trouble started when Theresa (Jen Lilley) won custody of Tate (Colin and Kyle Schroder) and promptly left town with him.

Days of Our Lives spoilers say Brady will find out that his fiancée cost him custody. He’ll be furious with Eve for setting that in motion and lying to him. However, Theresa’s crushing news could add to the chaos.

During the week of September 24-28, DOOL spoilers state that Theresa will get in touch with Brady. She’ll want to give him some updates, but they won’t be good ones. Days fans know that Theresa headed to California to be with Kimberly (Patsy Pease), whose leukemia has returned. She assured Brady that he could visit anytime he likes.

Days needs a reason to keep Theresa away from Salem, so she may explain that Kim’s getting worse. She could declare the move permanent or even divulge plans to move out of the country for some treatment program. The NBC soap just loves to send people far away for experimental trials.

Regardless of what Theresa shares, Brady should be devastated. If Theresa provides another hurdle to seeing Tate, it’ll add to Brady’s anger when Eve’s secret comes out. Brady will undoubtedly blame her for wrecking his chances of being a hands-on father. Eve didn’t mean to change everything for Brady, but she definitely set some darkness in motion.

Eric (Greg Vaughan) will also get the scoop on Brady’s blackmail scheme. Jennifer (Melissa Reeves) will come clean about how Brady drove Nicole (Arianne Zucker) out of town. Since Eve filled Jen in, that’ll be another reason for Brady to explode.

Nevertheless, Theresa’s bombshell just might be the worst part of all this. Brady’s devastated without his son by his side, so every day they’re apart will drive him closer to the edge. We’ll keep you posted as other Days of Our Lives details emerge. Stick with DOOL and don’t forget to check CDL often for the latest Days of Our Lives spoilers, updates and news.