BY Heather Hughes on May 16, 2018 | Comments: one comment
Related : Days of Our Lives, General Hospital, Soap Opera, Spoiler, Television, The Bold and the Beautiful 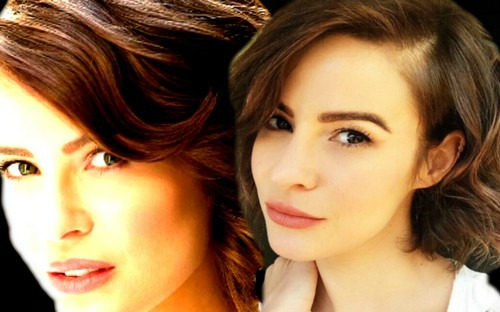 Days of Our Lives (DOOL) spoilers reveal that there’s some big news to report. Nothing’s been confirmed just yet, but new evidence suggests Linsey Godfrey may have joined DOOL’s cast. She’s a familiar face to many soap fans. Godfrey used to play Caroline on The Bold and the Beautiful, but the show wrote her out and only brings her back for occasional appearances.

Naturally, that made Godfrey a prime candidate for another daytime drama. There’s no need to let good talent go to waste! Here’s what we know so far. A recent blind item pointed to a bit of a soap war. Soap Opera Digest teased that one actress was being courted by two shows, so that could easily apply to Godfrey.

B&B doesn’t seem interested in locking Godfrey back into a contract. The Young and the Restless probably wouldn’t have a place for her right now either. However, General Hospital has become the soap reject factory hiring broken toys! They’re always anxious to snatch up favorites from daytime dramas that fired them.

Days of Our Lives could also use someone in Godfrey’s age range. It seems GH and Days may have been battling it out to sign her. If you want potential proof, look no further than Godfrey’s Twitter account. GH’s executive producer, Frank Valentini, is among her recent follows. However, Godfrey later followed Greg Vaughan (Eric) along with the official Days account. It appears we may have a winner!

The Vaughan follow is particularly interesting, especially since Vaughan returned the favor. We’re betting Eric will get a new love interest down the road. Days may have signed Godfrey with that goal in mind. Eric is a handsome, beloved character on the NBC soap. He was one half of the popular “Ericole” pairing, but Days had to abandon ship when Arianne Zucker (Nicole) chose to depart.

Godfrey seems far too young to be a Nicole recast and wouldn’t be a good fit for that role anyway. Besides, Zucker still tweets about Days frequently. She might come back at some point, so Days of Our Lives probably doesn’t want to fill her spot. It makes more sense to give Eric a fresh start with someone new. Nicole could always shake things up for them later.

Eric is currently paired with Jennifer (Melissa Reeves), but that couple’s fallen flat with fans. Since viewers just aren’t feeling it, Days of Our Lives spoilers say a new plan may be in the works. Other Twitter accounts with inside knowledge claim Godfrey’s coming, so it sounds like it’s happening!

Are you excited about Godfrey’s possible debut at Days? We’ll give you updates as other DOOL details emerge. Stick with the NBC soap and don’t forget to check CDL often for the latest Days of Our Lives spoilers, updates and news.