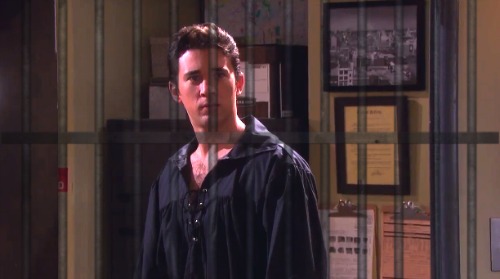 Days of Our Lives (DOOL) spoilers reveal that Chad’s (Billy Flynn) setting himself up for trouble. He wasn’t happy about Stefan’s (Tyler Christopher) decision to take Abigail (Marci Miller) to Hong Kong, so he’s decided to go as well. Chad will be on hot on their trail soon enough.

Of course, Chad doesn’t know that his wife isn’t quite herself at the moment. “Gabby” is actually the one heading off with Stefan. Days of Our Lives spoilers say Chad will catch “Gabby” off guard when he shows up. They’ll have an awkward encounter as they discuss the Stefan situation.

Will Chad grow suspicious of Abigail and Stefan’s connection? He has every right to be wary since “Gabby” is falling in love with his brother! DOOL fans can expect “Gabby” to confess her feelings to Stefan next week, so Chad may sense that something’s up between them. He wants to trust Abigail, but Stefan’s relentless pursuit of her will still leave him concerned.

To make matters worse, Chad will manage to get himself arrested in Hong Kong. There’s no word yet on what will land Chad behind bars, but it can’t be good news! This is the last thing Chad needs right now. He won’t want to deal with legal drama on the other side of the world, but that’s the dilemma he’ll be facing.

Fortunately, Chad will have some help. He’ll rely on Belle (Martha Madison) to get him out of this jam. Days of Our Lives spoilers say Belle will have her work cut out for her. She’ll have a tough battle on her hands as she works to score Chad his freedom.

However, Days viewers know Belle’s the best in the biz. She’ll probably get the charges dropped and urge Chad to get home ASAP. He doesn’t need to stick around and cause any more Hong Kong chaos!

It sounds like some fun episodes are on the way. Are you enjoying Stefan’s storyline with Abigail, “Gabby” and “Dr. Laura”? When will Chad figure out what’s really going on? We’ll give you updates as other Days details emerge. Stay tuned to DOOL and don’t forget to check CDL often for the latest Days of Our Lives spoilers, updates and news.