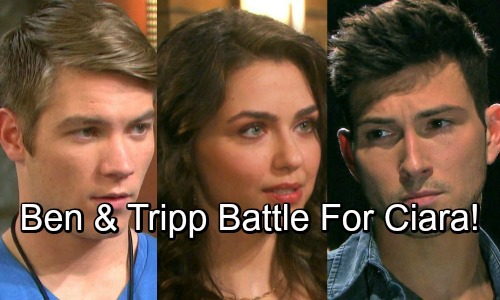 Days of Our Lives (DOOL) spoilers tease that Ben (Robert Scott Wilson) and Tripp (Lucas Adams) are in for quite a fight over Ciara (Victoria Konefal). Tripp has been pursuing Ciara for months, and finally the two of them are on good terms and have put Tripp’s almost-hookup with Claire (Olivia Rose Keegan) behind them.

But Ben is going to be a thorn in Tripp’s side when it comes to Ciara. When Ben showed up at the loft and interrupted Ciara and Tripp’s intimate moment with the news that he didn’t start the fire at the cabin, Tripp wasn’t at all pleased. The two men exchanged terse words, and Ben let it slip that he knew about Tripp’s indiscretion with Claire.

For Ben, that was a calculated move. He wanted to let Tripp know that he and Ciara had gotten close at the cabin and shared some secrets, and it definitely got under Tripp’s skin. Tripp didn’t want to think that there might be a connection between Ben and Ciara, but now that cat’s out of the bag.

And it looks like the Ben/Tripp drama is going to intensify going forward. Days spoilers say that Ciara will initiate a vote to allow Ben to move into the loft, which certainly won’t go over well with Tripp. Tripp will vote a resounding “no,” but he’ll be outnumbered by Ciara and Claire, who will both vote “yes.” Claire, of course, will have her own agenda and want Ben and Ciara together so she can have Tripp for herself.

It is difficult to imagine Ciara, Ben, Tripp, and Claire all co-existing in the loft together, and chances are there will be a significant amount of conflict as both Ben and Tripp try to outdo each other and get close to Ciara. And then there’ll be Claire, butting in and trying to push Ben and Ciara together at every turn.

It certainly looks like we have a new Days love triangle in the works…or more accurately a quadrangle, when you factor in Claire. Who do you think will end up with Ciara? Ben or Tripp? Stay tuned to the NBC soap and don’t forget to check CDL often for the latest Days of Our Lives spoilers, updates, and news.