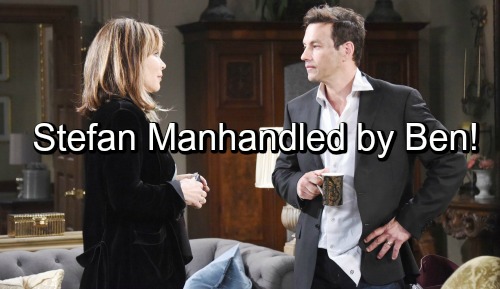 Days of Our Lives (DOOL) spoilers tease that Chad (Billy Flynn) will grow increasingly desperate. He can’t stand the thought of Abigail (Marci Miller) being married to his manipulative brother. Stefan (Tyler Christopher) has exploited Abigail’s mental illness in the past and Chad believes he’s doing it again.

Gabi (Camila Banus) planted plenty of clues and even drugged Abigail as part of her scheme. Chad fell for it, so he thinks Abigail needs the proper treatment. He’ll worry that Stefan will prey on Abigail’s weak side and draw “Gabby” to the surface completely. Chad may fear that he’ll lose Abigail for good if she goes too far.

However, Chad won’t sit back and let Stefan run the show. He’ll determine that he has to do something drastic for Abigail’s sake. Days of Our Lives spoilers say Chad will form an abduction plot. He’ll recruit Ben (Robert Scott Wilson) for some help with his latest plan.

Ben’s on the straight and narrow now, so he may remind Chad of that. He won’t to put his freedom at risk, especially now that he has feelings for Ciara (Victoria Konefal). Nevertheless, Chad may argue that Ben owes him this. He could suggest that it’d be Ben’s way of making amends, so those might be the magic words. That’s all Ben wanted to do when he scored his release and came back to Salem.

Days of Our Lives spoilers say Ben will overpower Stefan on a new Days episode in the week ahead, November 5-9. He’ll probably be acting on Chad’s orders. Once Ben has Stefan in a chokehold, the defeated DiMera will be out of options. Chad will have a chance to kidnap Abigail, take her a secluded cabin and figure out his next move.

DOOL fans can expect Chad to be torn about this. He’ll hate that he had to take his scheme so far, but he just won’t know any other way to help Abigail. Days spoilers state that Chad may regret his choice after Abigail goes into labor! As the delivery rapidly approaches, Chad will be forced to take charge.

Back with Stefan, he’ll be a tad roughed up at the DiMera mansion. Ben will go easy on him, but Stefan’s pride will still be wounded. Days spoilers reveal that Kate (Lauren Koslow) will learn about the ordeal. When she hears about the kidnapping shocker, Kate will realize Gabi’s plot is doing even more damage. She may consider coming clean about this nightmare or at least offering Stefan a big clue.

Regardless, Stefan’s on the verge of some major paternity drama! We’ll give you updates as other Days news comes in. Stay tuned to DOOL and don’t forget to check CDL often for the latest Days of Our Lives spoilers, updates and news.