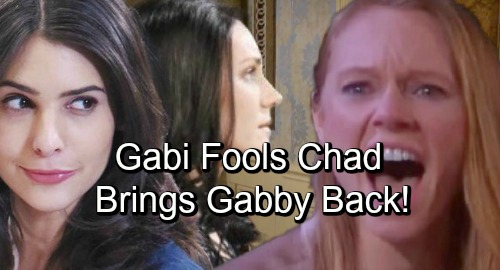 Days of Our Lives (DOOL) spoilers tease that Chad (Billy Flynn) is in for a big surprise. Chad is under the impression that his biggest problem is his estrangement from Abigail (Marci Miller) and the “fact” that Abigail is carrying Stefan’s (Tyler Christopher) baby. He hasn’t given Abigail’s mental state a second thought for some time now. After all, she did great work in therapy and successfully integrated her alters.

But Gabi’s (Camila Banus) scheme is going to cause Chad to wonder about Abigail’s mental stability. Gabi has been on a mission to get revenge on Abigail and Stefan, and it all started with switching the paternity test results so that Abigail falsely believed that Stefan was the father of her baby.

But that was child’s play compared to Gabi’s next big move, which was to drug Abigail and make her think she was losing time again, just like she did during the height of her dissociative episodes. Gabi even hid a black “Gabby” wig underneath Abigail’s bed to provide further “evidence” that Abigail’s alters are returning.

And it looks like that planted evidence will soon make a big impact. According to Days spoilers, Chad will find the wig hidden underneath his wife’s bed. This will surely come as a major shock, especially since he recently found Abigail passed out after Gabi drugged her. He’ll probably put two and two together and conclude that Abigail’s losing time again and “Gabby” is back.

Chad will be so upset by his discovery that he’ll go straight to Jennifer (Melissa Reeves). Jennifer will no doubt be horrified to learn that her daughter may be slipping back into her Dissociative Identity Disorder (DID). Chad will be horrified, too, and he’ll probably worry that if “Gabby” is back, it means that Abigail might be seeing Stefan as “Gabby.”

Of course, Gabi will be thrilled to learn that her plan is working. Gabi’s ultimate goal is for Abigail to be committed so that when her baby is born, Stefan gets custody and bonds with the baby before Gabi’s big reveal that Chad is truly the baby’ father. It’s a devious plan, but so far it seems to be working.

What do you think Gabi will do next to try to convince everyone that Abigail’s DID is back? Stay tuned to DOOL and don’t forget to check CDL often for the latest Days of Our Lives spoilers, updates, and news.