Days of Our Lives Spoilers: Ciara Trapped in Cabin Fire, Loses Consciousness – Rafe Pulls Her from the Flames 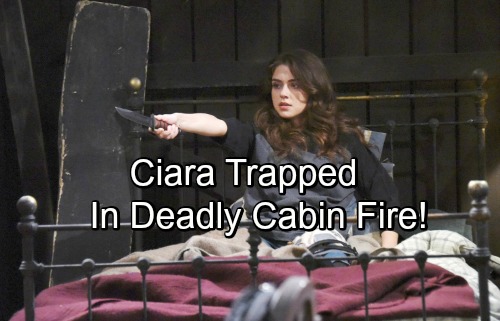 Days of Our Lives (DOOL) spoilers tease that big trouble’s brewing at the cabin. Ben (Robert Scott Wilson) won’t be able to think straight without his medication. Once he’s all out of pills, he’ll have disturbing visions and wild outbursts. Ciara (Victoria Konefal) will grab the knife she tossed aside and hope it offers enough protection. She’ll definitely fear for her life throughout this scary ordeal.

Unfortunately, that’s not even the worst of it! Days spoilers state that Ciara will struggle to handle Ben’s erratic behavior. As he grows increasingly agitated, something will go terribly wrong. One way or another, a raging fire will break out! Ciara’s got a broken leg, so it’s not like she can run out and save herself.

If Ciara can put pressure on her leg, she might be able to hobble toward the door. Then again, Ciara may be in too much pain to get very far. Regardless, Ciara won’t make it out before the smoke fills her lungs. She’ll sputter until she finally passes out, so Rafe (Galen Gering) and Hope (Kristian Alfonso) will have to get over there fast.

Thankfully, a DOOL rescue will soon be possible. Days of Our Lives spoilers hint that Clyde (James Read) may offer some clues. He’ll appear for a prison chat on a new Days episode, July 6, but he won’t exactly be cooperative at first. Nevertheless, Hope and Rafe won’t give up. They’ll keep grilling, so hopefully they’ll get something useful out of crafty Clyde Weston.

During the week of July 9-13, this mission will pay off. Ciara will be found, but that’ll just bring more concerns. Once Rafe sees that burning cabin, he won’t hesitate to go in and save Hope’s daughter. Rafe has known Ciara since she was just a kid, so he cares about her, too. He couldn’t bear the thought of Ciara burning to death in there.

Days of Our Lives spoilers say Rafe will pull Ciara from the flames, so that’s great news. When someone finally catches up with Ben, he’ll certainly face questions. Even Ciara won’t be sure how this fire started. She’ll wonder if Ben set it just like the one before.

There’s a good chance Ben’s innocent, but it may take some work to get anyone to believe him. We’ll give you updates as other Days details emerge. Stick with DOOL and don’t forget to check CDL often for the latest Days of Our Lives spoilers, updates and news.