BY hellodrdavis on September 6, 2018 | Comments: one comment
Related : Days of Our Lives, Soap Opera, Spoiler, Television 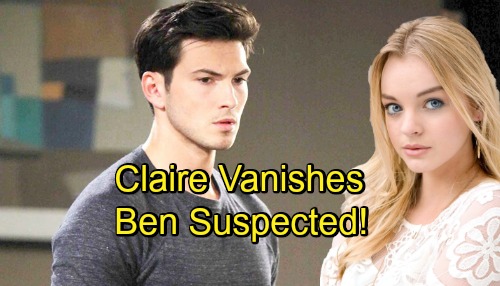 Days of Our Lives (DOOL) spoilers tease that Claire (Olivia Rose Keegan) may be in for some scary times ahead. She’s just been through a terrible ordeal, having been held hostage and briefly kidnapped by Kristen (Stacy Haiduk) at John (Drake Hogestyn) and Marlena’s (Deidre Hall) wedding. You’d think that she’d deserve a break, but it sounds like may have to endure another terrifying event.

Days spoilers say that Claire will go missing and her roommates will be unable to find her. Under normal circumstances, it may not seem too worrisome if Claire were to go MIA for a little while. Her roomies would notice, but it wouldn’t be a big deal.

But in light of recent developments around Salem, Claire’s disappearance will likely worry those who care about her. Belle (Martha Madison) and Shawn (Brandon Beemer) are back in Salem, so it won’t make sense that Belle would just take off while her parents are visiting.

Also, since Claire was recently targeted by Kristen, some may wonder whether Kristen took her again. Having Kristen on the loose will unnerve everyone, and she may pop into people’s minds as a possible captor. But there’s someone else who will probably garner even more suspicion in Claire’s disappearance, and that’s Ben (Robert Scott Wilson).

Chances are, fingers will point toward Ben. There is a long list of people who don’t trust him and believe he’s still a dangerous serial killer. Hope (Kristian Alfonso), Shawn, Belle, and Tripp (Lucas Adams) will likely look in Ben’s direction when Claire comes up missing. Their worst fear will be that Ben has killed again, and that Claire was his victim!

Of course, Ben will probably be horrified that people think that he’s dangerous enough to start killing again. He’ll likely protest their accusations, and his only defender will probably be Ciara (Victoria Konefal), as usual. Or will even Ciara be skeptical about Ben once Claire goes missing?

Where do you think Claire will go when she’s MIA? And will Ben have anything to do with it? Stay tuned to DOOL and don’t forget to check CDL often for the latest Days of Our Lives spoilers, updates, and news.