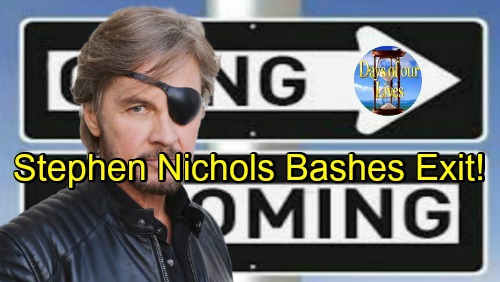 Days of Our Lives (DOOL) spoilers tease that we’ve got some comings and goings news to pass along. For starters, let’s talk about a tough departure. On August 31, Stephen Nichols’ final scenes as Steve aired. Of course, you didn’t notice if you weren’t already in the loop!

Steve simply gave John (Drake Hogestyn) a pep talk and received details on Marlena’s (Deidre Hall) condition. He exchanged a glance with Kayla (Mary Beth Evans) near the end of the episode, but they didn’t get a real goodbye. That’s because Steve doesn’t know he’s going to be out of the picture. His arrest will happen off screen, so DOOL will fill Kayla and fans in on September 4.

Steve will face espionage charges thanks to his bionic eye and all the ISA info it’s been recording. He had no idea he was uploading classified shockers to powerful enemies. It’s nice that Steve won’t be abandoning Kayla by choice, but it’s a shame we couldn’t have gotten some hints earlier.

Nichols is clearly disappointed in the exit strategy. He wanted to stick around, but couldn’t reach a contract agreement with Days. On Twitter, Nichols retweeted a clip of his last scene and added a negative comment. “Wow, that sucks,” Nichols said. As a beloved vet, Nichols expected better for Steve!

On a more positive note, Stacy Haiduk’s run as Kristen will continue this week, September 3-7. Many Days of Our Lives fans are on board with her version of the character. Haiduk is really knocking it out of the park! Susan’s (Stacy Haiduk) still in town as well, so she may find more trouble to get into soon.

Other Days of Our Lives spoilers say Sheila (Tionne “T-Boz” Watkins) will make a comeback this fall. She’ll return to Salem and stir the pot for Eli (Lamon Archey). Sheila will also get caught in a battle with Abe (James Reynolds), so Lani (Sal Stowers) should join the drama. There’ll be several people she cares about involved.

That’s it for comings and goings! We’ll give you updates as other Days details emerge. Stay tuned to DOOL and don’t forget to check CDL often for the latest Days of Our Lives spoilers, updates and news.