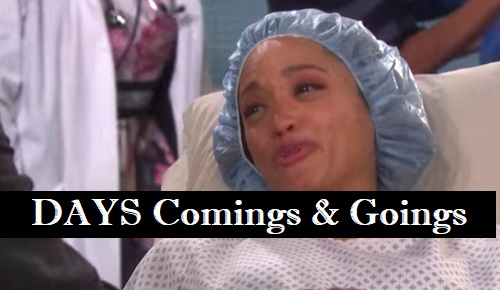 Days of Our Lives (DOOL) spoilers tease that we’ve got some comings and goings news to pass along. First, we should talk about an important return. Abigail (Marci Miller) will come home after her latest trip to Boston. She’ll be feeling much better thanks to the hard work she put in with Grandma Laura (Jaime Lyn Bauer).

Unfortunately, Abigail will fall apart all over again. She won’t slip back into her DID, but she’ll definitely have a crisis on her hands. Abigail soon realize she she’s pregnant, which means she’s facing a paternity mystery. Days spoilers say Abigail will hope this baby belongs to Chad’s (Billy Flynn), but she’ll know Stefan (Tyler Christopher) is a possible father candidate.

DOOL viewers will also see Larry Poindexter reprise his role as Father Louis. Eli (Lamon Archey) and Lani (Sal Stowers) just suffered a terrible loss. Their son didn’t survive Lani’s C-section, so Father Louis will drop by to see them. He’ll want to pray with the heartbroken parents and help them through this difficult time.

In an interview with TV Insider, Sal Stowers opened up about this heartbreaking story. “I don’t know what it’s like to be pregnant or to grieve a child,” Stowers said. “It’s all foreign to me. So, I had to dive into Lani’s world, be vulnerable, and just go there. It was really hard!”

Stowers went on to say that ”the response has been overwhelming” and she’s “very grateful.” Of course, Days of Our Lives fans are wondering what’s next for Lani’s love life. Now that there’s nothing tying her to Eli, will she drift back toward JJ (Casey Moss)? Stowers suggested that Lani wouldn’t even be able to think about that for a while.

“There’s the guilt, the blame — as far as a relationship with either Eli or JJ, that’s not even in her brain right now,” Stowers said. “She’s not capable of giving that any energy because her world has just been turned upside down.” Days of Our Lives spoilers state that Lani will just try to put one foot in front of the other.

That’s it for comings and goings! We’ll give you updates as other Days news comes in. Stay tuned to DOOL and don’t forget to check CDL often for the latest Days of Our Lives spoilers, updates and news.