Days of Our Lives Spoilers: Competition for Hope’s Heart Heats Up – Should She Dump Rafe and Get with Ted? 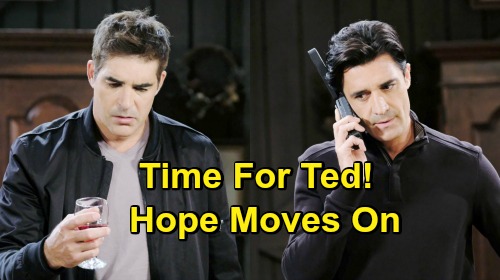 Days of Our Lives (DOOL) spoilers tease that Ted (Gilles Marini) will add to Hope’s (Kristian Alfonso) troubles. He’s already turned her life upside down by asking for protection, but at least he’s doing her a big favor in return. Their Ben (Robert Scott Wilson) takedown plot is already underway.

Ben is sane and on a better path now, but no one can blame Hope for worrying about Ciara (Victoria Konefal). Most people out there wouldn’t want their kid dating a serial killer – reformed or not! That’s why Hope’s agreed to help Ted, but only if he helps her secure Ben’s confession. She doesn’t care if it’s bogus as long as Ben gets locked up and is kept far away from Ciara.

Hope and Ted have been bonding a bit as they work, so could actual feelings develop? Rafe (Galen Gering) will certainly get that impression, but it’ll be due to Hope’s lies and Ted’s pot-stirring. Days of Our Lives spoilers say Ted will claim Hope’s cheating behind Rafe’s back. He’ll get punched over the fib next week, but he’ll think it’s worth it. Ted’s the kind of guy who likes to push buttons!

However, it’s clear that Ted is genuinely interested in Hope. He’s a ladies’ man, so he doesn’t give up on the objects of his affection quickly. Despite Hope’s insistence that she’s not on board, Ted will feel like he can win her over. Rafe may have concerns about that, too.

Lack of trust could cause even more issues for “Rope” in the coming weeks. Sami’s (Alison Sweeney) hookup with Rafe shattered it on his end. Hope and Rafe fought their way back to a good place, but now Hope’s threatening to derail that with Ted.

Even after Hope explains what she’s up to, Rafe should struggle with suspicions. Jealousy and doubts could easily drive this duo apart. Of course, that may not be such a bad thing. Rafe and Hope have been together for what seems like forever by soap standards.

Let’s face it: Hope and Rafe aren’t supercouple material. They probably should’ve been over a long time ago, but DOOL never really had another option for Hope after Bo (Peter Reckell) died. Now they do! Some Days fans think Hope and Ted have some nice chemistry.

Rafe and Hope worked for a while, but is it time to move on? Days of Our Lives spoilers say Ted will rev up his efforts, so things could be shifting. Are you rooting for Ted and Hope or would you rather see the show stick with Hope and Rafe? We’ll give you updates as other Days news comes in. Stay tuned to DOOL and don’t forget to check CDL often for the latest Days of Our Lives spoilers, updates and news.