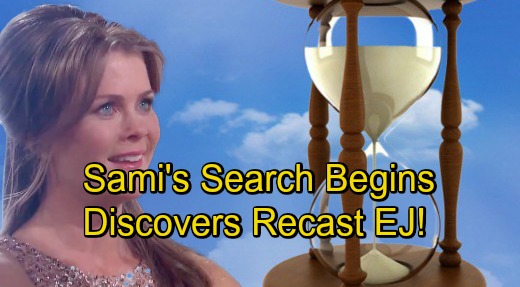 Days of Our Lives (DOOL) spoilers tease that Rafe (Galen Gering) will pull some strings and score Sami’s (Alison Sweeney) release. Hope’s (Kristian Alfonso) been determined to take Sami down for shooting Marlena (Deidre Hall), but it was really a tragic accident. Sami was pretty out of it after being drugged by Kristen (Stacy Haiduk). She wouldn’t have dared to point that gun with a clear mind.

Plus, Sami didn’t even willingly pull the trigger. It was Eric’s (Greg Vaughan) bright idea to lunge toward his foggy sister and grab the gun. That’s when it went off and set their family’s current disaster in motion. The good news is Sami will get off the hook soon. The bad news is she’ll immediately go looking for more trouble!

Once Sami walks free, she’ll leave the police station on a mission. Days of Our Lives spoilers say the DiMera mansion will be Sami’s first stop. She’ll undoubtedly suspect that Kristen’s been hiding out there.

Sami’s been locked up, so she’s had no way of tracking Kristen down and confronting her again. After she’s allowed to roam Salem, Sami will be eager to find her fierce enemy and demand answers. It seems she won’t be scared off by their latest confrontations. Ever since Kristen mentioned EJ (James Scott) and the possibility that he’s alive, that’s about all Sami can think about.

Days of Our Lives spoilers say Sami will do her best to figure out what’s up. She’ll want to know if Kristen’s telling the truth or just blowing smoke. Kristen’s awfully manipulative, so lying certainly isn’t something she shies away from.

However, DOOL confirmed that Kristen’s claims are accurate. She privately laughed over EJ’s survival and Susan’s (Stacy Haiduk) ignorance, so that serum he received obviously paid off. Whether Sami gets proof or not, she’ll be prepared to tackle this challenge. If there’s even a slim chance that EJ can be located, Sami has to go for it.

It’s worth mentioning a blind item that’s been floating around. Word has it one of the four soaps could have a recast in the works. Could that be EJ? It’d be the perfect time since Sami’s about to search for him. Days viewers would love to see EJ back in action. If we can’t have James Scott, another dashing British actor will do.

Regardless, Sami won’t stop until she gets the whole story and hopefully finds her true love. We’ll give you updates as other Days details emerge. Stay tuned to DOOL and don’t forget to check CDL often for the latest Days of Our Lives spoilers, updates and news.