BY hellodrdavis on October 22, 2018 | Comments: one comment
Related : Days of Our Lives, Soap Opera, Spoiler, Television 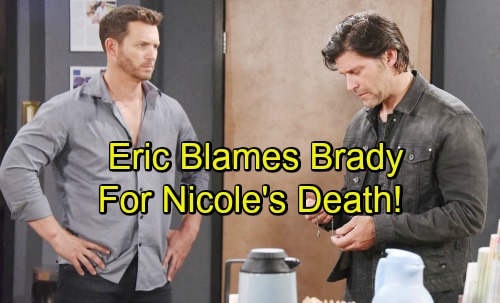 Days of Our Lives (DOOL) spoilers tease that the rift between Eric (Greg Vaughn) and Brady (Eric Martsolf) isn’t going to get better anytime soon. It didn’t seem like it could get much worse after Eric learned that Brady had blackmailed Nicole (Arianne Zucker) and forced her to leave Salem. But tragically, things will get even more strained between the brothers.

Eric was shocked when he learned from Sami (Alison Sweeney) that Brady had accompanied Kristen (Stacy Haiduk) to Nashville. He and Sami incorrectly assumed that Brady had embraced his dark side and was working with Kristen.

And soon things are going to take a tragic turn, when the secret facility in Nashville catches fire with Nicole and Holly trapped behind some debris. While Holly is able to be rescued, Nicole won’t be able to get out, and Eric will want to stay with her, saying he’d rather die with Nicole than live without her.

At that point, Brady will take matters into his own hands and knock Eric out in order to drag him to safety and save his life, while Nicole dies when the building explodes. And when Eric comes to, he’ll be angry with Brady for his actions and devastated that Nicole has perished.

All of this will make Eric despise Brady even more than he did before. Days spoilers say that Eric will blame Brady for Nicole’s death. After all, if Brady hadn’t blackmailed Nicole in the first place and made the recording of Nicole’s confession, Xander (Paul Telfer) wouldn’t have had leverage over Nicole and they would never have ended up in the secret facility.

Eric will also accuse Brady of being in cahoots with Kristen. Brady will probably try to explain that he was only playing Kristen to try to find EJ (last played by James Scott) for Sami, but Eric will only view Brady’s explanation as lies and excuses. He’ll be in deep grief, and as far as he’ll be concerned, he and Brady will no longer be brothers.

Do you think Eric and Brady have any chance of ever reconnecting as brothers? Stay tuned to DOOL and don’t forget to check CDL often for the latest Days of Our Lives spoilers, updates, and news.

Can Eric rescue Nicole from certain death? Watch Days of our Lives, weekdays on NBC. pic.twitter.com/C3NQ7FnNPe