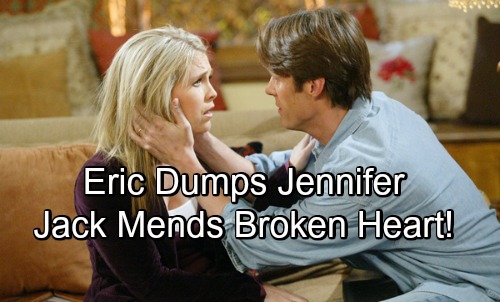 Days of Our Lives (DOOL) spoilers tease that Jennifer (Melissa Reeves) has some heartbreak in her future. The writing’s on the wall when it comes to Jen and Eric’s (Greg Vaughan) romance. After Eve (Kassie DePaiva) came clean about Nicole’s (Arianne Zucker) departure, it left Jennifer with a dilemma. She had to decide whether she was going to protect her relationship or risk all to give Eric closure.

Jennifer chose the former, so now she’s keeping a major secret from Eric. DOOL fans know that’s going to be a huge problem. Eric recently insisted that trust was part of Jen’s appeal. Eric doesn’t believe Jennifer would ever betray him, but she’s already doing it. If Eric knew she was deceiving him about Brady’s (Eric Martsolf) blackmail and Nicole’s forced exit, he’d be absolutely livid.

Nevertheless, Jennifer believes this is her only chance at keeping Eric. It’ll probably turn out to be the reason she loses him instead! Dishonesty is something Eric just can’t tolerate, so he may break up with Jen when he learns the truth.

Of course, that’s undoubtedly for the best. Eric and Jennifer have chosen each other for all the wrong reasons. They use words like “easy” and “comfortable” to describe their relationship. Most other Days couples would use more passionate terms.

Still, this split should bring devastation – especially for Jennifer. She’ll be the one who feels like she blew it. Fortunately, Jennifer has some good news headed her way eventually. Days of Our Lives spoilers say Jack’s (Matthew Ashford) long-term return is in the works, which obviously means he’ll be back from the dead.

DOOL doesn’t let ghosts roam around for months or years. They wouldn’t have fantasies or fake flashbacks playing nonstop either. Days of Our Lives spoilers state that Jack will come home in the flesh, so he should have quite a tale to tell. Jennifer may go from the agony of losing Eric to the joy of seeing her beloved Jack again. She made it clear that Jack was the love of her life in a recent episode.

Are you ready to see Jack and Jen together again? Will Eric dump Jennifer over her secret? Will Jack lift her out of a dark place? We’ll give you updates as other Days details emerge. Stay tuned to the NBC soap and don’t forget to check CDL often for the latest Days of Our Lives spoilers, updates and news.