Days of Our Lives Spoilers: Evil Eve Is Back – Jack Has Amnesia, Memories Hidden On Flash Drive 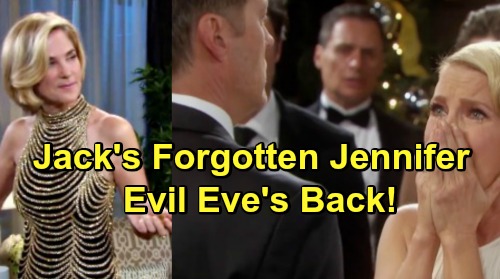 Days of Our Lives (DOOL) spoilers tease that Salem is in for a huge surprise as the clock strikes midnight on New Year’s Eve. Jack Deveraux (Matthew Ashford) will walk in the door and stun everyone gathered at Doug’s Place to ring in the new year. Of course, Jennifer Deveraux (Melissa Reeves) will be floored by Jack’s arrival, but there will be a twist.

It seems that Jack won’t be running happily back into Jennifer’s arms. According to Days spoilers, Jack will react stoically and formally to Jennifer. He just won’t seem like himself, and this will confuse and upset Jennifer.

As it turns out, Jack will be revealed to be a patient of Dr. Wilhelm Rolf’s (William Utay), who was Stefano DiMera’s (Joseph Mascolo) mad scientist who now works for Kristen DiMera (Stacy Haiduk). It seems that Jack was injected with Rolf’s “come back to life” serum, which explains his resurrection from the dead.

But like Will Horton (Chandler Massey) did, Jack will suffer a side effect from the serum…he’ll have amnesia and won’t remember who he is or his friends and loved ones. That will put a big wrinkle in Jack and Jennifer’s reunion. While Jennifer will be thrilled to see Jack, Jennifer will be a perfect stranger to Jack.

It’s a scenario that will be totally orchestrated by none other than Eve Donovan (Kassie DePaiva). When Eve left Salem a few weeks ago, she vowed to get revenge on Jennifer and make her life a living hell. Well, it seems that Eve’s following through on her promise. Bringing Jack back with amnesia is sure to hurt Jennifer, and Eve knows it.

Or perhaps Eve will spill the beans that Jack’s memories are out there somewhere, sending Jennifer on a wild goose chase to find them. Either way, it’s a pretty evil plan. It looks like evil Eve is back!

Do you think Eve will withhold Jack’s memories from Jennifer and Jack? Stay tuned to DOOL and don’t forget to check CDL often for the latest Days of Our Lives spoilers, updates, and news.