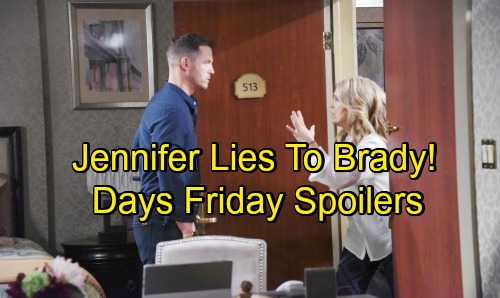 Days of Our Lives (DOOL) spoilers for Friday, August 3, tease that Jennifer (Melissa Reeves) will meet back up with Brady (Eric Martsolf). He just can’t let the whole drug scheme go. Brady knows Victor (John Aniston) must’ve had a partner, so he’ll push Jen to tell him who it is. He’s determined to find out who’s responsible for making him lose custody of Tate (Colin and Kyle Schroeder).

Of course, Days fans know Jennifer’s in a tight spot. Now that she’s accepted Eric’s (Greg Vaughan) proposal, the stakes are higher than ever. Jennifer has to keep Eve’s (Kassie DePaiva) involvement a secret or else Eve will reveal the truth about Nicole (Arianne Zucker). Since Jen doesn’t want Eric to reunite with his ex, lying is her only option. She may claim she has no idea who Victor worked with.

Poor Brady’s brain seems to have disappeared again, so he can’t figure out this easy mystery. He’ll continue to brush off Eve’s suspicious behavior, which means she’ll get away with her actions for now. Across town, Eric will deliver some exciting news to Marlena (Deidre Hall). He’ll give his mom updates on his engagement to Jennifer, so she’ll let Eric know she’s thrilled for him.

Marlena may think it’s a little soon for Eric and Jen to be tying the knot, but she’d never try to stop them. Jennifer makes Eric happy and that means something to Marlena. Days of Our Lives spoilers say Marlena and Eric will bond over their upcoming weddings, so there should be plenty of joy in Friday’s DOOL episode.

Elsewhere, John (Drake Hogestyn) will need a favor from Paul (Christopher Sean). Perhaps this is about the “Jarlena” nuptials as well. The wedding’s happening later this month, so it’s time to nail down all the final details. Paul will certainly pitch in with anything his dad needs. He’ll just be glad that Marlena and John are getting their fairytale ending.

Other Days of Our Lives spoilers say Will (Chandler Massey) and Sonny (Freddie Smith) will make a discovery. They’ll realize Ted (Gilles Marini) sent the cryptic notes, so they’ll wonder what he wants. Ted knows Sonny and Will got rid of Leo’s (Greg Rikaart) body, which means he’s got some dangerous leverage. You can bet he’ll have some shocking demands next week.

Days viewers won’t want to miss this blackmail plot and all the fallout. We’ll keep you posted as other DOOL info comes in. Stay tuned to the NBC soap and don’t forget to check CDL often for the latest Days of Our Lives spoilers, updates and news.