Days of Our Lives Spoilers: Gabby Makes a Deal for Stefan’s Sake – Showdown with Chad and Jennifer Brings Shockers 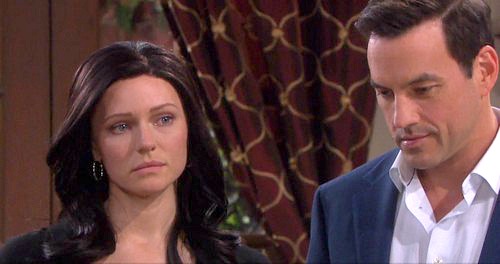 Days of Our Lives (DOOL) spoilers tease that Abigail (Marci Miller) will remain trapped in her own mind. “Gabby’s” still in control, so things will remain tricky. Despite her desire to live her own life, “Gabby” can’t bear to walk away from Stefan (Tyler Christopher). She just abandoned her getaway plan to be there for her love in the hospital.

“Gabby’s” basically turning herself in since someone’s bound to spot her, but she just doesn’t care anymore. For “Gabby,” a life without Stefan is no life at all. She’s worried that Stefan could die from his injuries, so being by his side is her only concern. “Gabby” may understand that their dream of being together is over. The jig is up, but she can still be there for Stefan in his darkest hour.

If Stefan awakens and sees “Gabby” beside him, he’ll undoubtedly tell her to go. Stefan won’t want “Gabby” to give up on her plans for the future. However, Days spoilers say “Gabby” will insist on staying right next to him. She won’t budge until Stefan’s on the mend or she’s forced to leave by the cops.

DOOL spoilers reveal that “Gabby” will be taken to the police station eventually. She’ll have to face the music and accept that she’s going to disappear. Of course, “Gabby” will get a good confrontation in before she vanishes forever. Days of Our Lives spoilers say Chad (Billy Flynn) and Jennifer (Melissa Reeves) will argue with “Gabby.” They’ll have no choice as they try to get through to Abigail.

“Gabby” will choose to use her leverage and score a deal. She’ll do everything she can to protect Stefan. Maybe “Gabby” will vow to take herself out of the picture if Stefan remains unharmed. After Chad’s latest Days attack, “Gabby” may fear that he’ll try to kill his brother again. She’ll be desperate to save Stefan from a grim fate.