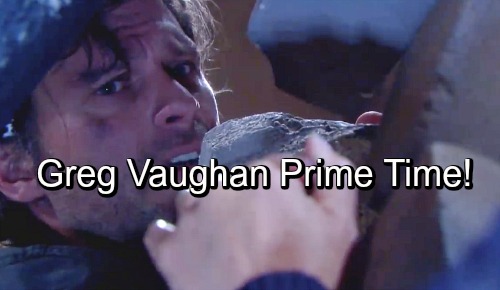 Days of Our Lives (DOOL) spoilers is pleased to pass on some exciting news about a popular Days star. Greg Vaughan, who portrays Eric Brady on the NBC soap, will be guest starring on an upcoming episode of the hit CBS series “MacGyver.”

“MacGyver” is an action-adventure drama about “Mac” MacGyver, who operates within a clandestine organization within the government. He and his team use scientific knowledge and creative problem-solving abilities to save lives.

Greg will star as “Ethan” on the episode titled “Scavengers + Hard Drive + Dragonfly.” No word yet on the nature of Greg’s role and how he’ll interact with the main characters on the show. In the episode, the team travels to Ghana to recover a hard drive that contains a mysterious file called “dragonfly.”

The episode guest starring Greg is scheduled to air on Friday, November 9, 2018, at 8/9pm ET/PT on CBS. It will be interesting to see how Greg’s character on “MacGyver” differs from his role as the former priest Eric Brady.

Greg Vaughan has portrayed Eric Brady on Days of Our Lives since 2012, and has also appeared in several TV series, including Queen Sugar, 90210, and Charmed. He also portrayed Lucky Spencer on General Hospital and Diego Guttierez on The Young and the Restless.

Are you excited to see Greg on MacGyver? Stay tuned to DOOL and don’t forget to check CDL often for the latest Days of Our Lives spoilers, updates, and news.