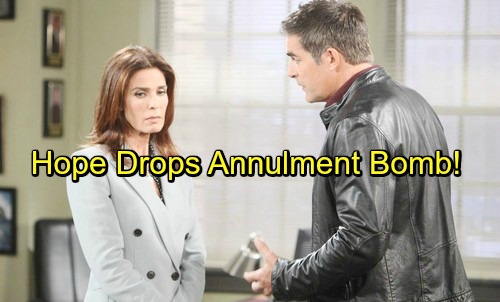 Days of Our Lives (DOOL) spoilers tease that Hope (Kristian Alfonso) will finally return to Salem. Once Rafe’s (Galen Gering) secret was exposed, Hope decided to take some time for herself. She just couldn’t stand to be around Rafe after his betrayal. They split mere hours before he slept with Sami (Alison Sweeney) and he never mentioned it after they quickly got back together.

That was obviously something Rafe shouldn’t been honest about, so Hope’s been questioning their whole relationship. If Rafe was willing to take that secret to his grave, how can Hope ever really trust him again? She’s undoubtedly been pondering that question during her stay in Hong Kong.

Everyone’s got an opinion on what Hope should do, so she’s at least been willing to listen to advice. However, that doesn’t mean Hope has to take it. This is her life and her romantic future. Only Hope can decide what she’s willing to overlook and what she just can’t get past.

Days spoilers say things will be tense between Hope and Rafe after she comes home. There’ll be a sense of deep sadness over what they’ve lost, but Hope will still have some lingering anger. Rafe will apologize once more, but he may seem a bit distracted. Another problem will emerge by then.

Thanks to Gabi’s (Camila Banus) upcoming conviction, Rafe will be pretty upset. He’ll feel like he failed his sister, so he’ll be in desperate need of comfort. Despite Hope’s own pain, she’ll be there for Rafe in this time of crisis. Days of Our Lives spoilers state that they’ll share some close moments as Hope offers support.

It looks like Rafe could get the wrong idea when Hope consoles him. He may think she’s on the verge of taking him back. Alas, Rafe will face a devastating blow. Days spoilers say Hope’s about to drop a bomb that will change everything.

DOOL fans know Hope had Belle (Martha Madison) draw up some annulment papers, so she’s ready for the next step. Hope will insist on breaking this news to Rafe. She’ll indicate that she put a lot of thought into this and found that ending their marriage is the only solution.

Nevertheless, Rafe won’t give up on their love. Days of Our Lives spoilers say he’ll vow to fight for Hope and the future they were meant to have. Rafe may not be Hope’s husband for much longer, but he’ll plan to fill that role again soon.

Does Rafe deserve another chance? Will he be able to win Hope back down the road? We’ll give you updates as other DOOL details emerge. Stick with the NBC soap and don’t forget to check CDL often for the latest Days of Our Lives spoilers, updates and news.