BY hellodrdavis on August 25, 2018 | Comments: one comment
Related : Days of Our Lives, Soap Opera, Spoiler, Television 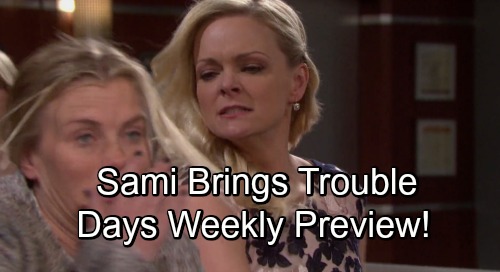 The new Days of Our Lives weekly promo video teases that Sami’s (Alison Sweeney) return is bringing an incredible amount of drama to Salem. First, Marlena (Deidre Hall) is shown lying unconscious, shot square in the chest, moments after the gun Sami was holding went off. Thankfully, it looks like Marlena will get prompt medical attention in this live or death situation, but she’s going to be in pretty bad shape with that chest wound.

Family and friends will rush to the hospital to wait for word on Marlena, but there won’t exactly be unity in the waiting areas. Belle (Martha Madison) will apparently blame Sami for the shooting. She’s heard yelling “she’s fighting for her life because of you!” at Sami and is shown slapping Sami in the face! It looks like it’s going to get pretty heated, as Eric (Greg Vaughn) has to physically intervene between the two sisters.

At the police station, Sami and Hope (Kristian Alfonso) are shown arguing, and Sami appears to taunt Hope a bit by stating that “I slept with the man that you love.” It looks like Hope will finally give Sami a piece of her mind, as Hope is shown telling Sami that all she cares about is herself. The claws will come out, as this showdown has been a long time coming.

Surprisingly, Hope is also shown crouching over Rafe (Galen Gering), who is lying unconscious on the floor at the police station. What is this about? Will Rafe collapse or have some sort of health crisis? Chances are, it will have something to do with Sami!

Finally, a horrific scene unfolds in a hotel room as Paul (Christopher Sean) and Kristen (Stacy Haiduk) struggle over a gun in front of a window. Brady (Eric Martsolf), Eve (Kassie DePaiva), and Sami all watch in horror as Paul and Kristen fall out of the window together. Look for Paul to be seriously injured, as Days spoilers say that his life will soon hang in the balance.

It looks like Sami is going to bring a world of trouble to Salem this week! Be sure to stay tuned for all the drama. We’ll give you updates as other news comes in. Stay tuned to the NBC soap and don’t forget to check CDL often for the latest Days of Our Lives spoilers, updates, and news.