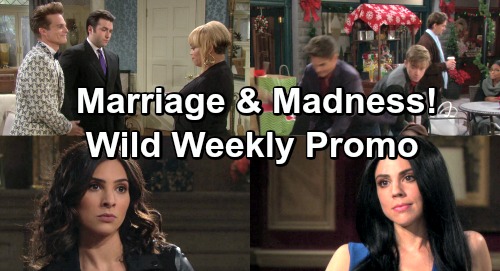 Days of Our Lives (DOOL) spoilers for the week of December 10-14 tease that some shocking moments are on the way. Revenge will be sweet for several Salemites, but their enemies won’t go down without a fight. First, Gabi (Camila Banus) will face off with Abigail (Kate Mansi. She’ll realize Abigail beat her at her own game by pretending to be “Gabby” and duping Stefan (Tyler Christopher).

Gabi won’t be pleased about that, but she’ll try to stay calm and hide what she’s up to. She intends to frame Stefan for the paternity test tampering to avoid more suspicion. Abigail will remain in the dark on Charlotte’s true father, but she’ll assure Gabi that total destruction is brewing. Days spoilers say Abigail will go after Gabi with everything she’s got!

Meanwhile, Hope (Kristian Alfonso) will get caught in Rafe (Galen Gering) and Ted’s (Gilles Marini) battle. She’ll be stunned when Ted fibs about having an affair with her and gets decked over it. Hope will try to tame Rafe’s jealousy by spilling the real story. This is more of a business arrangement and Hope’s only goal is to keep Ben (Robert Scott Wilson) away from Ciara (Victoria Konefal).

Rafe will want to trust Hope, but it’ll be tough when she’s been sneaking around and lying to his face. Ted will remain a troublemaker, so that’s not going to help matters. “Rope” should be OK for now, but that doesn’t mean this marriage will last forever.

Speaking of marriage, Leo (Greg Rikaart) will be thrilled over his impending wedding. Will (Chandler Massey) won’t understand why Sonny’s (Freddie Smith) just giving up and “marrying this blackmailing creep.” He’ll convince Sonny to try one last strategy, but it’ll end in failure. Days of Our Lives spoilers say Sonny will officially throw in the towel and explain the situation to his parents.

Adrienne (Judi Evans) and Justin (Wally Kurth) will be left reeling over Sonny’s horrible tale. He’ll fill them on why he has to marry Leo, so DOOL fans can expect Adrienne to slap this arrogant groom. She’ll be appalled with Leo for destroying Sonny’s life and ruining his second chance at happiness.

Will’s also going to have his turn with Sonny’s soon-to-be husband. He’ll punch Leo in the town square, so that’ll be a nice early Christmas present. Days of Our Lives spoilers say Leo will find Sheila (Tionne “T-Boz” Watkins) and ask her to officiate. The nuptials will kick off, but Victor’s (John Aniston) arrival will bring drama.

Victor will launch a tirade and insist that Sonny can’t marry the man who targeted Titan. However, he’ll change his tune once he learns what’s at stake. Days spoilers say Sonny and Leo will indeed tie the knot, so don’t miss this big event! We’ll give you updates as other news comes in. Stick with DOOL and don’t forget to check CDL often for the latest Days of Our Lives spoilers, updates and news.