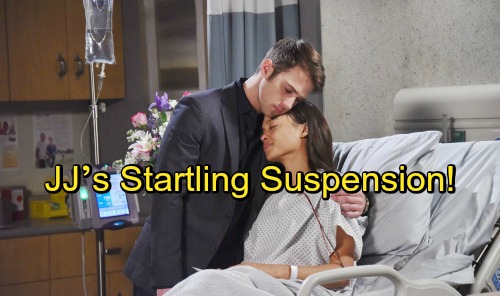 Days of Our Lives (DOOL) spoilers tease that JJ (Casey Moss) will make a bold move for Theresa’s (Jen Lilley) sake. Before he has the chance, things have to get worse for this fierce mom. Next week, Theresa will really pull out all the stops in the custody battle. She’ll give Ted (Gilles Marini) the greenlight to hit harder than ever before.

That could give Theresa the upper hand, but it’ll also make her feel horrible. Theresa desperately wishes her Thrady” reunion dreams would’ve come true. She fought so hard to get back to Brady (Eric Martsolf) and Tate (Colin and Kyle Shroeder), but this isn’t the result she had in mind.

Theresa’s partly to blame since she’s got an all or nothing mentality. If Theresa had backed off the romantic side of all this, she probably could’ve worked out a fair custody agreement. Then again, DOOL fans know Brady’s anything but fair these days. He’s still acting like Theresa voluntarily abandoned her family, which simply isn’t the case.

Nevertheless, what’s done is done and now the custody war’s going to get ugly. After a particularly rough day of sparring, Days spoilers say Theresa will confide in JJ. She’ll admit she hates what she’s doing to Brady. He’s coming after her as well, but Theresa will still face guilt for her role in his suffering.

Days of Our Lives spoilers state that JJ will offer some valuable advice. He’ll suggest that Theresa should try making peace with Brady. Although Brady doesn’t want to reunite, that doesn’t mean their family has to break up. JJ will think Theresa should find some common ground with her ex and do what’s best for their child.

Later, Eve (Kassie DePaiva) will strike some surprising blows. She’ll even get Victor (John Aniston) in on the action, so Theresa will feel like all hope is lost. Fortunately, JJ will remain in Theresa’s corner. He’ll prove it when he makes a jaw-dropping announcement at the hearing.

Whatever JJ reveals could score Theresa some serious points. It could also lead to trouble since JJ will be suspended from his job the following week. There’s no guarantee those Days of Our Lives spoilers are related, but the timing certainly adds up.

Regardless, JJ will show he’s a good friend no matter the cost! We’ll give you updates as other Days news comes in. Stay tuned to DOOL and don’t forget to check CDL often for the latest Days of Our Lives spoilers, updates and news