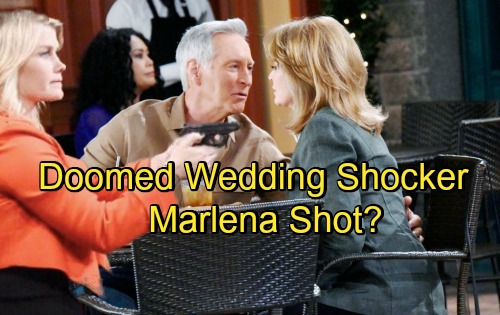 Days of Our Lives (DOOL) spoilers tease that Marlena’s (Deidre Hall) excitement will rev up. She’s really looking forward to a big wedding with all her friends and family members. Marlena’s also hoping Sami (Alison Sweeney) will RSVP and make her special day complete.

However, Marlena recently offered a crucial hint about the drama to come. She brought up Kristen DiMera (Eileen Davidson) and how she wished a body had been found. Days fans will recall that Kristen popped up during Susan’s (Eileen Davidson) last stint, but Salem still believes she’s dead and gone. They’re in for a huge surprise when Kristen decides to show up out of the blue!

Unfortunately, Davidson wasn’t available when Kristen’s scenes were filmed. Stacy Haiduk (ex-Patty on The Young and the Restless) will be filling in, but DOOL viewers should stay open-minded about the recast. Haiduk rocked it as her crazy Y&R character and word has it her upcoming Kristen stint will be fantastic.

As for Davidson, maybe she can return to the role someday in the future. For now, we should brace for another version of Kristen and await all her drama. During the week of August 6-10, Days of Our Lives spoilers say there’ll be another sign of trouble. Kristen is indeed inching closer. 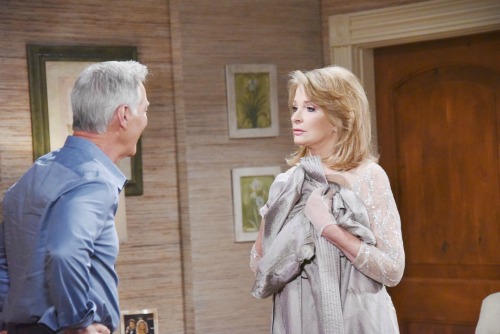 Marlena will decide to try on her wedding dress, but John (Drake Hogestyn) will walk in at the worst possible time. He’ll catch a glimpse of his beautiful bride and gush over how wonderful she looks. Nevertheless, Marlena will be a bit superstitious. She won’t like the idea of John seeing her in her bridal gown before the ceremony.

Of course, John will assure Marlena that everything’s going to be fine. They’ve been through enough ups and downs for a lifetime. Days of Our Lives spoilers say John will be convinced that all their problems are behind them. Too bad he’s wrong about that!

As we mentioned, Kristen will be a real issue soon enough. It looks like she’ll arrive to derail the wedding, but things will only get worse from there. This hasn’t been confirmed yet, but there’s strong buzz about Marlena getting shot at the nuptials. In a startling twist, most info doesn’t point to Kristen actually doing the deed.

Time will tell on that, but it’s possible someone will shoot at Kristen and miss. Sami has been known to be a little trigger-happy in the past, so she’s a good option. Regardless, this wedding will be must-see TV! We’ll give you updates as other Days news comes in. Stay tuned to DOOL and don’t forget to check CDL often for the latest Days of Our Lives spoilers, updates and news.