Days of Our Lives Spoilers: Jordan Heads Back to Salem – Ben Reunites with His Sister, Shocking Story Twists Brewing 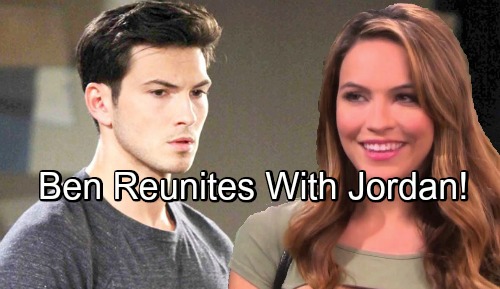 Days of Our Lives (DOOL) spoilers tease that Ben (Robert Scott Wilson) could have someone else in his corner down the road. He recently told Ciara (Victoria Konefal) that she was the only one who cared about him. However, that’s not exactly true. Ciara’s just the only person who cares in Salem! Ben still has one relative out there who could support him, so it’s almost time for her to get back in the mix.

Of course, we’re talking about Ben’s sister. DOOL viewers will recall that Chrishell Stause played Jordan Ridgeway from 2013-2015. Now that the actress is married to Justin Hartley (ex-Adam Newman on The Young and the Restless, Kevin on This Is Us), it looks like she goes by Chrishell Hartley both personally and professionally.

Her Days character didn’t generate much excitement from fans back then, but that was mostly because Ben was so dull. By making Ben a serial killer and taking him down such an insane path, it finally added some interest to the story. Even though Ben’s redemption arc’s in progress, he has so many layers now. He’s become quite fascinating, so that should add some interest to Jordan, too.

Ben mentioned Jordan when he opened up to Ciara at the cabin. Ollie and Tammy Sue had it rough growing up with cruel Clyde Weston (James Read). Ben and Jordan were close back then, but can they get back to a good place in their relationship? That would certainly help Ben feel better about this Days situation.

Ciara’s support is great, but it’d be nice for Ben to have a family member he could count on. Ben still loves his sis, so reconnecting would mean the world to him. It should be fun to see Ben and Jordan in more scenes together, but that’s not the whole story behind this return. Days of Our Lives spoilers say Jordan’s upcoming arc will bring some surprising twists.

There’s no word yet on how long Jordan will be sticking around, but Soap Opera Digest confirms she’ll first appear in the new year. We’ll give you updates as other Days of Our Lives news comes in. Stay tuned to DOOL and don’t forget to check CDL often for the latest Days of Our Lives spoilers, updates and news.