BY Heather Hughes on May 9, 2018 | Comments: 2 comments
Related : Days of Our Lives, Soap Opera, Spoiler, Television 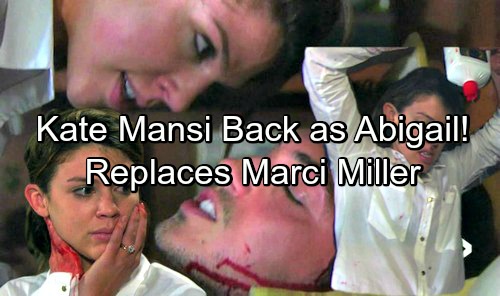 Days of Our Lives (DOOL) spoilers reveal that it’s time to report on round two of the Abigail casting shakeups. Marci Miller is exiting DOOL according to Daytime Confidential’s sources. Naturally, that leaves Days fans wondering about the future of the character.

Will the show recast and leave Abigail in Salem or let her exit along with Miller? Word has it Abigail will be sticking around with a familiar portrayer in the role. Nothing’s been confirmed yet by Days, but Daytime Confidential also indicates that Kate Mansi has been offered the part back and SOD claims she accepted it.

Mansi played Abigail from 2011-2016 and found great success at Days of Our Lives. She even won a Daytime Emmy for outstanding supporting actress in 2017 (after her departure). Of course, Mansi was also one half of the popular “Chabby” pairing.

“Chabby” still has plenty of fans with Miller in the role and rightly so. She’s done a great job with putting her own spin on Abigail. Billy Flynn (Chad) has consistently offered praise for his costar on social media. Miller recently scored a Daytime Emmy nom and she’s done some stellar work that she can be proud of.

Nevertheless, Mansi was arguably the more popular Abby. When she stepped away to pursue other projects, it was a tough loss for Days. Mansi was electric during Abigail’s steamy love affair with EJ (James Scott). She also wowed viewers when Abigail went off the rails and set fire to batty Ben (Robert Scott Wilson).

Plus, Mansi and Flynn’s chemistry was off the charts. Many fans would love to see Mansi return to Days and reunite with Flynn’s Chad on screen. It’s a bummer to hear that Miller’s leaving, but the idea of Mansi reprising the role is certainly exciting! We’re trading bad news for some excellent buzz.

Unfortunately, we have to address the possibility that Flynn could be on his way out as well. There’s been nothing solid on his contract renewal yet. If Flynn leaves, the show would probably choose to recast and pair someone else with Mansi.

On the bright side, Mansi would obviously be accepted by fans. DOOL would just have to worry about finding a new Chad. That’s better than having to hunt for two brand-new versions of these characters. Flynn’s departure could make locking Mansi in more crucial than ever!