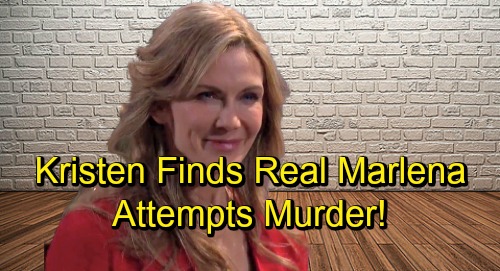 Days of Our Lives (DOOL) spoilers tease that Hattie (Deidre Hall) will get quite a scare at the hospital. She’ll have to talk her way out of trouble when Kristen (Stacy Haiduk) appears, but talking is what Hattie does best! Kristen will be ready to pump a bullet or two in Marlena (Deidre Hall) and finally finish the job. That’ll force Hattie to convince her that she’s not the real “Doc.”

DOOL fans can expect some alarming moments for Hattie, but she’ll eventually get Kristen off her back. Hattie will breathe a huge sigh of relief once Kristen’s gone. She’ll be able to relax and marry John (Drake Hogestyn) in peace. However, Hattie will fill her hubby-to-be in and leave him concerned. John may worry that Kristen won’t stop until she finds Marlena and seeks a lethal outcome.

Of course, Kristen will indeed keep searching. She’ll ultimately find herself in that recovery suite, so she’ll point her gun at her victim. As luck would have it, Marlena will wake up just before Kristen arrives. She may let out a scream to alert someone to danger. Marlena fought hard to stay alive, so she won’t want Kristen coming along and snuffing her out.

Days of Our Lives spoilers say Roman (Josh Taylor) and Kayla (Mary Beth Evans) will rush in. They’ll leap into action and hope to prevent another tragedy. Roman will do whatever he can to wrestle the gun away from Kristen. He’ll be desperate to stop this deadly madness.

After the gun goes off in the struggle, part of the ceiling will crash down on Roman. Kristen will move forward to harm Marlena, but Days spoilers say Kayla will have other plans. Her heroic move would make Steve (Stephen Nichols) proud!

Kayla will ignore any fears and just focus on saving Marlena’s life. She’ll manage to snatch the weapon, so Days spoilers state that Kristen will bolt. She won’t risk sticking around and getting thrown behind bars. Like Kristen said, she doesn’t do jail! Kristen just isn’t a prison kind of gal, so she’ll abandon her Marlena murder efforts for now.

Nevertheless, more shockers are ahead in Salem. DOOL viewers won’t want to miss all the fun, so we’ll give you updates as other Days of Our Lives news comes in. Stay tuned to the NBC soap and don’t forget to check CDL often for the latest Days of Our Lives spoilers, updates and news.